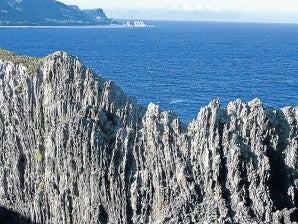 BEAUTY FROM THE EDGE Calayan, a fabled island in the Babuyanes Group in the northernmost part of the country, is edged with rugged coastal landscapes and pristine white beaches and coves. Calayan is bound by the Balintang Channel and Batanes in the north and the Babuyan Channel and mainland Luzon in the south. ESTAN CABIGAS/contributor

Our rented motorized pumpboat, locally called the lampitaw, chugged at a shamelessly slow 10 kilometers per hour across the Babuyan Channel. Its engine was defective, causing travel time to stretch from five to nine hours.

Otherwise, it was a beautiful day and the sea was mercifully calm. This compensated for the uneasy journey aboard a small vessel meant primarily for cargo and livestock.

Our group was traveling from Claveria, Cagayan, to Calayan, a fabled island in the Babuyanes Group in the northernmost part of the archipelago. It is remote, and although abounding in natural wonders, it attracts only the truly adventurous.

We were going there on a mission: to train students from four public high schools to monitor and record rainfall and help build online meteorological data. Rainfall observations conducted by a nationwide network of schools can be tapped for more accurate weather reporting and forecasting.

Called Project Rain Gauge, the activity is an initiative of Smart Communications Inc. in partnership with the Philippine Atmospheric, Geophysical and Astronomical Services Administration (Pagasa), the Department of Education, and local government units.

Traveling with me were Deivid Rioferio of Smart Public Affairs; Leo Buñag, officer in charge of Pagasa’s regional services division in northern Luzon; and Cynthia Layusa, project manager of Isla Biodiversity Conservation Inc. (Isla), a nongovernment organization promoting the conservation of the biodiversity of Calayan and nearby islands.

Isla recommended Calayan for Project Rain Gauge because it is frequently visited by typhoons, making travel to the island restrictive.

Seas are guaranteed to be calm only in April and September. The rest of the year, the waters are treacherous—calm one day and rough the next. Travelers could get stranded for days because of the huge waves.

Rioferio said Smart was “the first private corporation to heed the call to visit and help this remote municipality in its efforts to be more attuned to its environment.”

“We have a strong partner in Calayan’s high schools; they have been participating in earth-friendly activities initiated by Isla, like coastal cleanups,” he said.

Layusa sees Project Rain Gauge as a way to deepen the Calayan youth’s environmental awareness and involvement in earth-friendly programs.

Students of St. Bartholomew Academy and Calayan High School and its branches in Dilam and Dibay were first taught the basics of climatology and how to use the rain gauge. Then they did exercises on rainfall monitoring and data gathering.

They now send the data via the Web to www.projectraingauge.ph, which is maintained and hosted by Smart.

“The data gathered by the students will help us verify the readings of the Doppler radar being constructed in Aparri, Cagayan,” Buñag said.

Calayan is one of five islands in the Babuyan Group, which belongs to two municipalities of Cagayan province: Calayan with its major island barangays Babuyan Claro, Camiguin Norte and Dalupiri; and private Fuga Island with its two islets under the jurisdiction of Aparri.

It is bound by the Balintang Channel and Batanes in the north and the Babuyan Channel and mainland Luzon in the south.

Calayan is largely coralline with good lowland forest; its highest point is 499 meters above sea level.

It is set at a moderate incline that tapers off to a public white-sand beach with polished shells, pieces of coral and small pebbles washed ashore.

In 2004 a new bird, called piding by locals, was discovered on the island in the course of a faunal survey conducted by a team of local and international conservationists led by Isla’s Carl Oliveros.

The bird is small with dark brown plumage and a distinctive red-orange bill and legs. It inhabits the forests and is almost flightless, making it easy to trap for food or as a pet.

It has been granted a provisionary threatened status.

Townsfolk support a conservation program initiated by Isla, and just last April, the local government held the first Piding Festival to raise awareness of this bird endemic to the island.

Isla accepts volunteers and can assist birders for piding tours and sightings.

The Babuyan Channel is also part of an ancient migratory path for gigantic cetaceans, popularly known as humpback whales.  The waters off the Babuyan Channel are the only known breeding ground in the country for these animals that can measure as long as 16 meters and weigh 36 tons in maturity, although there are also reported sightings on the eastern coast of the Sierra Madre.

Surveys conducted by Balyena.org, usually from February to May, have counted as many as 180 individuals based on photo records. The group takes in a number of qualified volunteers via its Facebook page to take part in the yearly humpback whale surveys.

Huge waves from the Pacific Ocean, as well as typhoons and tropical storms that ravage Calayan, have left the island with rugged coastal landscapes and pristine beaches and coves.

A visit to Cibang Cove on the eastern part of the island is a must. Pristine and beautiful white-sand beaches hemmed in by soaring cliffs and steep mountains are a spectacular sight!

A few meters walk from Cibang is Caniwara Cove, which has a wide stretch of flat rock just a few centimeters under water that draws migratory birds and fishermen looking for shells and baby octopus.

Right beside this cove is Nagudungan Hill, also called Bangaan because of some burial jars found there.

A short but steep climb leads to a surreal landscape at the top. Strong winds have caused pine trees, particularly those near the edge, to bend permanently toward the west.

The grassland reminds one of Gulugod Baboy, a hill in Batangas popular for day treks. But the almost flat terrain that tops Nagudungan drops off to vertical cliffs full of birds, crazy rock formations, small caves said to be full of sea snakes, and breathtaking views of Caniwara, Cibang and Cababaan Coves.

Locals say there are many waterfalls and caves waiting to be discovered, but it would take anywhere from a few hours to a few days of trekking and exploration to reach as the circumferential road is still being built.

There’s also a bounty of seafood on the island, but it’s quickly sold to ready Taiwanese buyers—unless you make arrangements with fishermen.

From time to time, especially in the afternoon, low-cost fish or dried seafood are sold from house to house.

To get to Calayan, one may take the bus from Manila to Claveria or Sta. Ana or Aparri, or fly to Tuguegarao in Cagayan, or to  Laoag City in Ilocos Norte. The closest municipality to Calayan is Claveria.

There are no fixed boat trips to Calayan and the other islands. There used to be a ferry from Sta. Ana; the service is expected to resume by the end of July with trips to Camiguin Norte and Calayan, lasting up to four hours.

Communication is not a problem, however, because Smart has cellular signal as well as mobile Internet via Smart Bro.

There is no hotel or resort in Calayan, but there is an organized home-stay program, through which one can arrange boat trips and check if the waters are navigable.

TPS First Homestay of Calayan is a cozy family home located a few blocks from the municipal hall. It is managed by Teresita Pimentel-Singun (+63929-8375737) and charges P200 a day per person.

They can also cook for you and inform you of vessels that you can take back to the mainland.

Calayan is far from the usual tourist circuit. But those who don’t mind roughing it will be greatly rewarded with an adventure like no other.

The author is a former telecommunications engineer turned freelance photographer, whose works have been published in coffee-table books and featured in international exhibits. He writes a travel blog at http://langyaw.com.