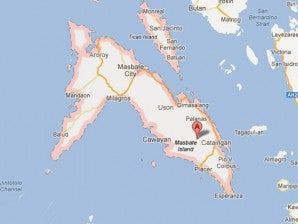 MANILA, Philippines—A communist rebel was killed in an encounter with government troops Wednesday in Palanas, Masbate, the military said.

Quoting reports from Lieutenant Colonel Jun Pacatan, commanding officer of the 9th Infantry Battalion, local villagers reported the presence of New People’s Army rebels extorting in the area. This prompted him to send his troops.

Recovered from the rebels were M16 and M14 rifles, two landmines and other war materials.

No soldier was hurt from the encounter, he said.

Pursuit operations were conducted against the rebels. With a report from Juan Escandor Jr., Inquirer Southern Luzon

Read Next
Water still spilling out of La Mesa Dam
EDITORS' PICK
DILG to stranded workers: ‘Stay where you are’ until Luzon-wide quarantine is over
UP-PGH wards for COVID-19 patients finished in 5 days
Style and music journeys with Claudia Barretto
Cebu City closes its borders
BREAKING: 1,075 people in PH has coronavirus disease – DOH
IATF: Food firms to operate with 50% of workforce during Luzon quarantine
MOST READ
Pacquiao to seek probe on leaked private letter from Barangay Dasmariñas
Tootsy Angara bares neighbor wanted them out of village
No more bread? Company forced to limit production
All 3 COVID-19 positive patients in Bicol sent home
Don't miss out on the latest news and information.