Metro Manila at a standstill 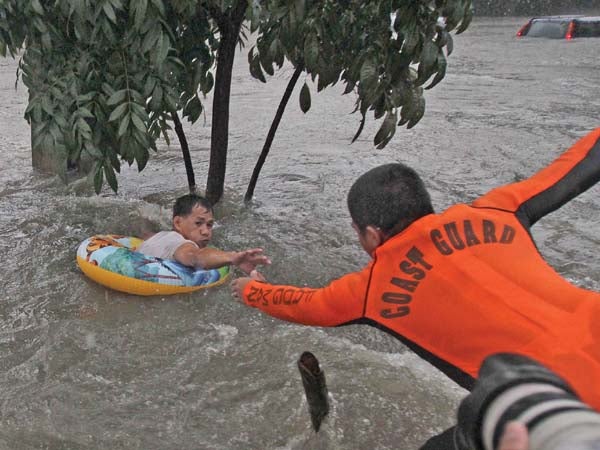 RESCUE A Coast Guard member reaches out to rescue a man who had clung to a tree for hours after swirling floodwaters swept him away along E. Rodriguez Avenue in Quezon City on Tuesday. MARIANNE BERMUDEZ

Nonstop monsoon rains left 80 percent of Metro Manila flooded on Tuesday, forcing hundreds of thousands out of their homes and sparking recollections of the calamitous Tropical Storm “Ondoy” in 2009.

Pagasa Administrator Nathaniel Servando said “the worst is not over for Metro Manila,” as the weather bureau expects the rains to continue well until Wednesday.

“It may start to subside on Thursday,” he said.

All cities in Metro Manila declared yesterday that there would be no classes in all levels today. Classes are also suspended in the provinces of Bulacan, Pampanga, Laguna and Cavite and the towns of Rodriguez and Cainta in Rizal province.

Power was turned off in some parts of the metropolis as a precautionary measure as the waters seeped into electrical facilities, Manila Electric Co. said.

Yesterday, schools, financial markets and most government and private offices were shut as key roadways in the metropolis were submerged by waters that in some areas reached neck-deep level.

Malacañang invoked on Tuesday the “police power” of the state by suspending work in both the public and private sectors in Metro Manila and nine nearby provinces after torrential rains flooded many parts of Luzon.

Weather forecaster Bernie de Leon said that in the 24 hours to Tuesday morning, 323 millimeters (13 inches) of rain fell on Metro Manila, compared with the average monthly rainfall of 504 mm for August.

Nine persons, including a month-old baby, were killed when a landslide buried their homes yesterday morning in Barangay Commonwealth in Quezon City at the height of the heavy downpour.

Two were electrocuted, bringing the number of fatalities in the metropolis and nearby provinces to at least 15.

Before the latest deluge, the death toll from eight days of sustained rains brought on by Gener had reached 53 with more than 268,000 people forced to flee their homes across the country.

Despite the torrential rains, flight operations at Ninoy Aquino International Airport remained normal. However, dozens of air travelers were unable to make it to their respective flights due to flooded roads leading to the airport’s four terminals. Only two flights were canceled on Tuesday due to bad weather.

Metro Manila’s Light Rail Transit and Metro Rail Transit train lines remained open to the public on Tuesday despite heavy rains that caused flooding in many parts of the capital.

Ramos said most of the submerged areas were in Camanava (Caloocan, Malabon, Navotas and Valenzuela).

But widespread flooding was also experienced in Muntinlupa, Makati, Parañaque, Quezon City, Marikina and Pasig, as well as in Calasiao in Pangasinan, Meycauyan and Obando in Bulacan, Cardona in Rizal, Noveleta and General Trias in Cavite, and 16 towns in Laguna.

“It was like water world,” Ramos said, describing the scene in the capital on Monday night. He said all cities in Metro Manila experienced flooding.

“If you’re going to tally the number of areas affected, then almost the entire metropolis was hit by floods,” said Corazon Jimenez, general manager of the Metropolitan Manila Development Authority.

Many towns and cities in nearby provinces were also flooded.

In low-lying areas, two-story houses were submerged as people perched on rooftops awaited rescue or lay huddled in evacuation centers.

Rosario Brutas, a market vendor in Bacoor, Cavite, said she and her husband woke on Tuesday to discover their home already partly submerged.

“We woke up before dawn to find our bed afloat,” the 32-year-old said from a hospital courtyard where her family and their neighbors had taken refuge.

Public Works Secretary Rogelio Singson warned residents of several towns around Laguna de Bay to prepare for possible evacuation due to rising waters of the lake.

As of 11 p.m. on Monday, the NDRRMC said 808,697 people had been affected by the heavy downpours across Metro Manila, Central Luzon and Calabarzon.

As if the flooding were not enough, a 5.3-magnitude earthquake struck off Occidental Mindoro province Tuesday 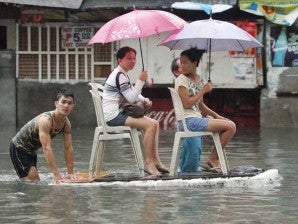 afternoon. The temblor was felt all the way to Pampanga province and Olongapo City in Zambales province.

The quake occurred at 1:03 p.m. 25 kilometers southwest of Lubang, according to the Philippine Institute of Volcanology and Seismology (Phivolcs). Fortunately, no damage was reported and Phivolcs said no aftershocks were expected.

The deluge came despite the absence of storm signals following the departure of Typhoon “Gener” over the weekend.

Unlike three years ago when Ondoy swamped the metropolis in a span of six hours and killed 464 people, the rains since Monday had been virtually unceasing.

“With Ondoy, the rain was heavier. This one is less intense but continuous,” Executive Director Benito Ramos of the National Disaster Risk Reduction and Management Council (NDRRMC) said, expressing fear of landslides should the rains keep up.

Throughout Tuesday, Gatchalian tweeted as he rode a six-wheel truck to inspect the flooding. Gatchalian, @stgatchalian on Twitter, posted that the flooded areas he passed—McArthur Highway, Maysan Road, T. Santiago Street, Lingunan Portion—were not passable.

When the truck passed by North Luzon Expressway’s stretch in Valenzuela, he tweeted a photo of the highway submerged in about waist-deep floods. “Baha sa NLEX… the highway is underwater,” he said.

Gatchalian later tweeted: “This is a disaster. A lot of people calling for rescue.”

It was the same picture across the northern cities of Caloocan, Malabon and Navotas, all of which had to deal with overflowing rivers such as the Tullahan and Tinajeros Rivers, the constant rain, and an incoming high tide.

“All rivers and creeks in Valenzuela overflowed. The city is 40 percent submerged,” he said.

In Navotas City, 13 out of its 14 barangays (villages) were flooded as of noon, with most areas either experiencing waist-or knee-deep floods.

Dams were at spilling level, or at least close to it, with Ipo Dam in Bulacan, Ambuklao and Binga Dams in Benguet, and San Roque Dam in Pangasinan, opening gates to release waters. Residents living near these dams were alerted to possible increase in downstream water levels.

Ramos expressed concern about what might occur if the rains continued.

“The problem is the rains had already soaked the ground. The soil is saturated already, so there’s nowhere for the water to go. If the rains continue, there might be landslides and more flash floods,” he said.

Police named the youngest fatality as Jonica Castulo when loose soil from a small cliff collapsed atop her family’s house in Barangay Commonwealth.

The landslide happened at a community on Bayanihan Street near Litex Road in Barangay Bayanihan at around 7:30 a.m.

The victims’ houses were built near a small cliff, but soil from the cliff had softened overnight due to the continuous rains which pounded Metro Manila.

A security watchman wading through a flooded street in Quezon City at the height of Tuesday’s rains got the shock of his life.

A man in Parañaque City was also electrocuted before dawn on Tuesday when he tried to disconnect a  sub-meter on an electric post.

When Jerwin Quijote, 32, a tricycle driver, fell from a water tank, he held on to the nearest thing in front of him: live wires.

Some of the country’s largest corporations and conglomerates on Tuesday mobilized their resources in response to the massive flooding.

Smart Communications and Globe Telecom Inc. said they had begun to offer free call and text services in key areas and evacuation centers around the metropolis and surrounding areas.

The San Miguel group said its Philippine Airlines subsidiary had waived rebooking fees of passengers unable to take their flights Tuesday. Rebooking for affected passengers would be subject to fare and booking class seat availability.