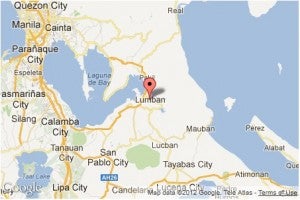 MANILA, Philippines — Some 42,000 families in Laguna province were affected by massive floods brought about by heavy rains Tuesday.

Laguna Governor ER Ejercito said in a television interview that local officials were monitoring the conditions of families who fled their homes and sought shelter to the province’s 114 evacuation centers.

Four persons have been confirmed dead in Laguna–three drowned while another died after being hit by a falling tree.

The province has since been placed under a state of calamity and classes in all levels have been suspended.

Ejercito pointed to the overflowing Laguna de Bay as one of their major problems in the area, saying that they hoped that efforts to rehabilitate the lake would be taken up soon.

Aside from amphibians and trucks which could be used in transporting stranded Laguna residents to their homes or evacuation centers, the governor said that they were also badly in need of relief goods.