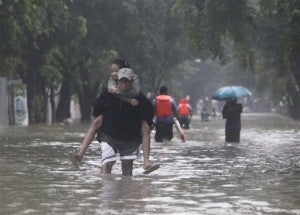 Residents wade along a flooded area in Marikina on Tuesday. Torrential rains pounding the Philippine capital on Tuesday paralyzed traffic as waist-deep floods triggered evacuations of tens of thousands of residents and the government suspended work in offices and schools.(AP Photo/John Javellana)

MANILA, Philippines – Nine people, including three children, were killed while four others were injured Tuesday as continuous  heavy rains spawned by the southwest monsoon triggered a landslide in Quezon City. Emergency crews scrambled to save tens of thousands of residents, some of whom were stranded on the roofs of their inundated homes.

The injured were identified as Kidskin Simbulan, 40, and Leslyn Simbulan, 19, NDRRMC said.

Up to forty six cities and municipalities in Regions 1, 3, 4-A and NCR have been affected by flooding, according to the latest report of NDRRMC.

Relentless rains submerged half of the sprawling Metro Manila, triggered a landslide that killed eight people and sent emergency crews scrambling Tuesday to rescue and evacuate tens of thousands of residents.

The deluge, the worst since 2009 when hundreds died in rampaging flash floods, was set off by the seasonal monsoon that overflowed major dams and rivers in Manila and surrounding provinces.

Executive Director Benito Ramos of the National Disaster Risk Reduction and Management Council (NDRRMC) said in a televised press briefing that the landslide, which occurred in Barangay (village) Commonwealth, was due to saturated soil.

“It’s like a water world,” said Ramos, adding that the rains flooded 50 percent of metropolitan Manila on Monday evening, and about 30 percent remained under waist- or neck-deep waters Tuesday.

He urged residents in areas prone to landslides and floods to stay in evacuation centers. Because the soil is saturated, even a little rain could be dangerous, he added.

“Now that it’s getting dark, I would like to repeat, if the rains are heavy you should be at the evacuation centers,” he said, warning that rescue operations are more difficult at night and could put responders at risk.

State weather bureau said a separate tropical storm off eastern China had intensified monsoon rains in the Philippines, which were forecast to last until Thursday.

The Philippine National Police has ordered the evacuation of residents near the landslide area to avoid further casualties from possible landslides.

The capital and other parts of the Philippines already were saturated from last week’s Typhoon Gener, which battered Manila and the north for several days before blowing away Friday. That storm was responsible for at least 53 deaths.

But Manila’s weather bureau said a separate tropical storm off eastern China had intensified monsoon rains in the Philippines and was responsible for the latest deluge, which began Monday night and did not let up until Tuesday morning.

In Manila’s suburban Quezon City, a landslide hit a row of shanties along a road, burying eight people, according to witnesses.

Army troops and police dug frantically to save those buried, who included four children, as surviving relatives and neighbors wept. All the victims were later dug up, including a man whose body was found near an entombed shanty’s door.

National police chief Nicanor Bartolome went to the scene and ordered all other slum dwellers to be evacuated from the dangerous area.

TV footage showed rescuers dangling on ropes to bring children and other residents to safety from flooded houses. Many residents trapped in their homes as floodwaters rose called radio and TV stations desperately asking for help.

“We need to be rescued,” Josephine Cruz told a radio station as water rose around her house near a river and creek in Quezon City, saying she was trapped in her two-story house with 11 other people, including her 83-year-old mother. “We can’t get out because the floodwaters are now higher than people.”

Vehicles and even heavy trucks struggled to navigate water-clogged roads, where hundreds of thousands of commuters were stranded overnight. Many cars were stuck in the muddy waters.

The La Mesa dam, which supplies water to the capital of 12 million people, spilled excess water early Tuesday into the rivers flowing into Quezon City, as well as the neighborhoods of Malabon, Valenzuela and Caloocan, where several villages were submerged.

Along the swollen Marikina River, police were deployed to move more than 5,000 residents away from the riverbanks in what Vice Mayor Jose Cadiz said was an enforced evacuation.

President Benigno Aquino III called an emergency meeting of Cabinet officials and disaster-response agencies to deal with the widespread flooding. He ordered officials to make sure all residents were accounted for in flooded villages and discussed how flooded hospitals can be helped in case they were hit by power outages.

The Philippine Stock Exchange in the financial district of Makati, which also was flooded, was closed. Also closed was the US Embassy along Manila Bay in the historic old city, which was flooded last week when a storm surge pushed the water over the seawall.

The military, which was involved in the rescue work, canceled several events due to the flooding, including an awarding of bounties to tipsters who helped troops capture al-Qaida-linked militants.

In 2009, massive flooding spawned by a typhoon devastated Manila and the surrounding areas and killed hundreds of residents in rampaging flash floods. The state weather bureau said that the current flooding was not as severe and that the weather may start to improve later this week.

Gener was the seventh of 20 typhoons and storms expected to batter the Philippines this year. With a report from Associated Press