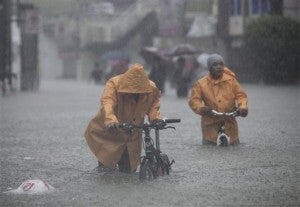 Two men push their bikes along a flooded area in Rizal, east of Manila, Philippines on Tuesday Aug. 7, 2012. Torrential rains pounding the Philippine capital on Tuesday paralyzed traffic as waist-deep floods triggered evacuations of tens of thousands of residents and the government suspended work in offices and schools. AP/John Javellana

Bagumbayan residents have been evacuated to the JK building along Laura drive.

Evacuation has stopped as of 11 a.m. as rainfall abated momentarily in the city and as the rescue unit focused on assisting the city social welfare department. Relief goods and blankets, good for three days, have been distributed to the evacuation centers.

Galicia said they will be installing portalets in the evacuation centers by Tuesday night.

Galicia also said main roads in the city are passable, but vehicles are avoiding roads and streets near waterways.