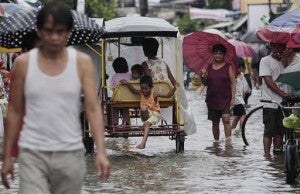 MANILA, Philippines—After two weeks of heavy rains in large parts of the country, including Metro Manila, expect more of the same in the next few days or even until next week.

The ditty “rain, rain go away come again another day” may not work as a shallow low pressure area (LPA) off northern Luzon may enhance the southwest monsoon and bring more rain.

The amount of rainfall in the metropolis and other parts of Luzon increased water levels in several dams and rivers, causing flooding and the evacuation of thousands of residents in low-lying areas in Quezon City, Marikina City, and Rizal and Iloilo provinces.

In Iloilo, one person drowned due to heavy rains since Sunday that forced the suspension of classes in seven towns on Monday.

At 9 p.m. Monday, the Philippine Atmospheric, Geophysical and Astronomical Services Administration (Pagasa) upgraded rainfall alert from green to red over Metro Manila, as the “habagat” (southwest monsoon) continued to bring heavy rainfall in the metropolis.

The state weather bureau warned of “flooding in low-lying areas and those located near the river channels.”

“As of 10 p.m., heavy to intense rainfall was observed over Antipolo. It is expected to continue for the next hour,” said Pagasa. “Serious flooding is expected.”

Pagasa weather forecaster Jori Loiz said the effect of the monsoon would continue until Wednesday, but an LPA, spotted 770 kilometers east of northern Luzon as of 4 p.m. Monday, might move closer to the Philippine Area of Responsibility and enhance the habagat.

The monsoon is moving northeast toward Haikui, which is moving westward toward southern Japan.

Rising water at the Marikina River and flooding spawned by La Mesa Dam breaching its spilling level Monday prompted the evacuation of close to 800 families in Quezon City.

Heavy rains on Sunday forced officials to hoist Alert Level No. 3 over areas near the Marikina River.

By 2 a.m., Monday, the river’s water level had reached 17 meters prompting officials to give residents the option of voluntary evacuation. A water level of 18 m would call for forced evacuation.

Dennis Carlos of the Marikina Rescue 161 said 1,232 people from Barangays Malanday and Tumana opted to evacuate as soon as the second alarm was declared at around 1 a.m.

A second alarm meant that water at the Marikina River was at least 16 m above sea level. By 8:35 a.m., water at the river went down to 15.9 m but the number of evacuees increased.

Action officer Elmo San Diego of the Quezon City Disaster Risk Reduction Management Council said that by 2 p.m. Monday, 379 families, or 1,889 persons, had evacuated from Barangay Bagong Silangan, which is near the San Mateo River, a tributary of the Marikina River.

Reports of La Mesa Dam reaching its spilling level likewise drove more than 400 families to flee from their homes near the Tullahan River.

The level at which La Mesa starts to overflow is above 80.15 m. La Mesa does not have to open its gates to ease water levels since it is a spill dam that is much like a giant infinity pool.

In Rizal province, more than 1,500 families left their homes on Monday due to flooding, according to the Disaster Risk Reduction and Management Council (DRRMC) in Cavite, Laguna, Batangas, Rizal and Quezon (Calabarzon).

The continuous rain flooded the towns of San Mateo where 111 families were evacuated and Cainta where 10 families left their homes as of 10 a.m.

In Rodriguez town, 1,466 families from four villages were evacuated to public schools and covered courts at around 5 a.m. on Monday.

DRRMC Regional Director Vicente Tomazar said forced evacuation was implemented after the water level in the Marikina River rose to more than 20 m between 1 a.m. to 4 a.m. Rodriguez Mayor Cecilio Hernandez ordered the suspension of classes in all levels.

At least 35 families, or 182 persons, were also evacuated in New Lucena town in Iloilo, according to the Provincial Disaster Risk and Reduction Management Council (PDRRMC).

Classes up to the elementary school level were suspended in the towns of Oton, Zarraga, Leganes, San Miguel, Banate and Anilao due to flooding.

Jerry Bionat of the PDRRMC identified the fatality as Arlie Castillon, 35, who drowned in Oton town on Sunday afternoon.

As heavy rains continue to pound Luzon, four dams have kept their gates open to release water in an attempt to stabilize levels and avert possible damage to the facilities.

But the Pagasa hydrometeorology division (HMD) alerted residents in San Carlos City and at least 17 municipalities in Pangasinan province that they may be flooded as a result of water released from San Roque Dam.

Ambuklao Dam in Benguet kept two gates open by 1.5 m after its water level reached 751.46 m, close to its overflow level of 752 m.

San Roque Dam in Pangasinan province, which catches most of the water from Ambuklao and Binga Dams, kept two gates open by 1.5 m after the water level breached its normal holding capacity of 280 m and by noon yesterday was measured at 283.55 m.

But Gov. Amado Espino Jr., fearing a repeat of the 2009 massive flooding in the province, urged Napocor to keep the dam’s water level below 280 m to provide space for rainwater that may be dumped by incoming typhoons.

The dam was blamed for flooding in 2009 that submerged 38 towns and cities and ravaged some P4-billion worth of crops, fish, roads, bridges and dikes after Napocor’s dam operators opened all  the dam’s spillway gates when it was about to reach its full capacity.

Spillage from the three dams is expected to further bloat the Agno River, where the water level had been raised by its tributaries—the Ingalera, Tagamusing and Sinocalan Rivers.

The swelling rivers caused flooding in low-lying areas of the municipalities of Sta. Barbara, Calasiao, Binmaley, Binalonan, Malasiqui as well as Dagupan and Urdaneta cities in Pangasinan.

In Bulacan province, Felicisima Mungcal, provincial disaster chief, said that as of Monday, the floodwaters in Calumpit town was about a foot high.

Obando town was under 2.5 feet of floodwater  aggravated by the high tide, Mungcal said.