Death toll from floods rises to 51 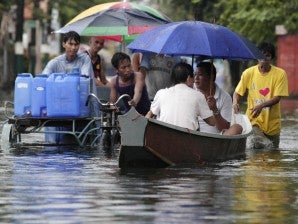 FLOOD BOAT.Residents ride a boat along a flooded area in Bulacan province on Monday. Heavy rains forced some classes to be suspended in Metro Manila and nearby provinces as hundreds of residents living in low-lying areas evacuated their homes due to high floods and rising of dam levels. AP

MANILA, Philippines—The death toll from over a week of floods in the Philippines rose to 51 as rain continued to pour, causing dams to overflow and forcing more people to flee their homes, officials said Monday.

“They have been evacuating more people since this morning. The waters are still rising because it just keeps raining,” Ramos told Agence France-Presse.

La Mesa Dam, the main reservoir of Metro Manila, which has a population of 15 million, began to overflow Monday, forcing the evacuation of over 1,000 residents living beside nearby waterways, the Metro Manila flood control office said.

However, more people still remain in these areas, many of them squatters who built shanties on riverbanks, said Edna Conda, duty officer at the National Disaster Risk Reduction and Management Council.

In the residential suburb of Quezon City, some areas reported floodwaters reaching the second floor of buildings, forcing various government agencies to rush rubber boats to the area, Conda said.

Other parts of the capital suffered knee- to waist-deep floods snarling traffic for hours, authorities said.

Even before the dam overflowed the government had more than 9,000 people huddled in makeshift evacuation centres, such as schools and basketball courts.