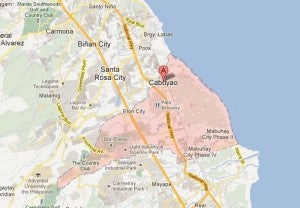 SAN PEDRO, Laguna—Cabuyao town in Laguna is now officially a city even if only less than 20 percent of its registered voters turned out for a plebiscite on Saturday.

The final count showed 22,132 residents voted in favor of the town’s conversion to a city, while only 2,538 residents voted “no,” according to lawyer Juanito Icaro, Commission on Elections director in Calabarzon (Cavite, Laguna, Batangas, Rizal, Quezon).

Icaro said by phone Sunday that the votes counted in the plebiscite translated to an 18.23-percent voters turnout.

Cabuyao, a first-class municipality in the second district of Laguna with a population of 205,376 as of 2007, had been seeking cityhood since last year, Icaro said.

The Local Government Code of 1991 requires a municipality to meet at least two of three requirements to become a city—land area of at least 100 square kilometers, an annual income of at least P100 million and a population of at least 150,000.

President Benigno Aquino, on May 16, 2012, signed the executive order directing the conversion of Cabuyao to a component city. The order was required before  the residents of the municipality could ratify the change of status in a plebiscite. Maricar Cinco, Inquirer Southern Luzon