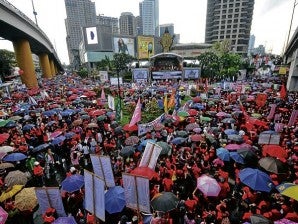 STORMING THE HEAVENS. Catholics estimated by police at around 7,000 to 10,000 brave the daylong bad weather on Saturday to attend the prayer rally at the historic Edsa Shrine spearheaded by the Catholic Bishops’ Conference of the Philippines to protest the reproductive health bill, renamed responsible parenthood bill. The rally’s numbers did not add up to the organizers’ expectation of 50,000, no doubt due to the endless rain. ANDREW TADALAN

The United Nations on Sunday warned that failure to pass a controversial reproductive health (RH) bill amid stiff opposition from the Catholic Church could reverse the country’s gains in development goals.

The RH bill would make it mandatory for the government to provide free contraceptives in a country where more than 80 percent of the population is Catholic and which has one of the highest maternal mortality rates in Southeast Asia.

Ugochi Daniels, country representative from the UN Population Fund, said she remained “cautiously optimistic” that President Benigno Aquino’s allies who dominate the House of Representatives could muster the numbers to pass the bill tomorrow after 14 years of often divisive debate.

“What is important now is to highlight the urgency of the bill,” Daniels said.

Unless the bill is passed, she said maternal deaths in the Philippines would continue to rise with more and more women getting pregnant at a young age without the proper health care and access to key reproductive health information.

“I think we’ve gone from 11 (maternal deaths) a day to between 14 and 15 a day now. And unfortunately, most of these are poor women,” she said.

The UN Population Fund was “very concerned” about the rising number of deaths, she said, and noted that even in war-torn Afghanistan the trend was decreasing.

She urged Philippine lawmakers to quickly pass the bill and “stop failing our young.”

“This is now the time. We have been waiting for a very long time,” Daniels said.

The UN’s call came as Catholic priests and nuns led thousands in a rally at the Edsa Shrine on Saturday to urge lawmakers to scrap the bill.

Besides free contraception, the bill seeks to give the poor preferential access to family planning services in state hospitals, while lessons on family planning and sex education would become compulsory in schools and for couples applying for a marriage license.

The United Nations has said a lack of education and access to condoms has led to an explosion of HIV infections in the Philippines, which it said is now one of seven countries in the world where cases have risen by 25 percent or more since 2001.