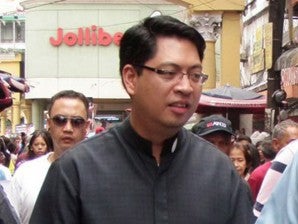 MANILA, Philippines—Hundreds of people, some arriving in private vehicles and others on foot, gathered outside the Edsa Shrine at a usually suburban Manila intersection Saturday for what church leaders had described as a massive prayer rally to show Congress most Filipinos were against the reproductive health bill pending in legislature for years.

Many of the faithful, who braved intermittent rains and occasional winds, stood under umbrellas as they waited for the rally to get underway.

Bishop Gabriel Reyes, chair of the Episcopal Commission on Family and Life of the Catholic Bishops’ Conference of the Philippines, was spotted in the area. So was Father Melvin Castro, the commission’s executive secretary.

Maribel Descallar, operations director of the commission, said the program was to start at 1:00 p.m.

Senior Superintendent Antonio Gumiran, deputy district director for operations, told the Inquirer they expected a crowd of at least 3,000 people. Organizers said Friday they were expecting up to 50,000 people at the rally.

Gumiran refused to say how many policemen were deployed in the area but only a few were visible to an inquirer reporter toward noon Saturday.