DoH warns against use of geckos to cure asthma, AIDS | Inquirer News

DoH warns against use of geckos to cure asthma, AIDS 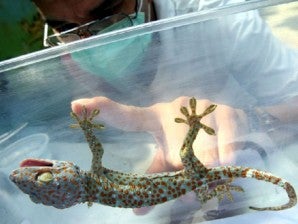 A gecko or Tuko is among 150 confiscated reptiles now at the Ninoy Aquino Parks and Wildlife in Quezon City. MARIANNE BERMUDEZ/INQUIRER

MANILA, Philippines – The Department of Health expressed concern over the use of “tuko” (gecko) to allegedly cure illnesses like AIDS and asthma.

In a press statement released Friday morning, the DoH said that they found “folkloric practice of using geckos [or “tuko”] as a cure for AIDS or asthma” was “unproven” and had “no scientific basis.”

They also warned against the use of geckos because these could “likely to aggravate their overall health and put them at greater risk.”

“We do not recommend it [the use of geckos] as cure for any ailment,” the health department said.

It urged the public to instead check with their doctors about effective treatments for asthma “that are easily available and [are] at affordable prices,” adding that for HIV patients there were “anti-viral medications that can control the progress of the disease.”

Environmental officials have also expressed alarm about the growing trade in the wall-climbing lizards in the Philippines. An 11-ounce (300-gram) gecko reportedly sells for at least P50,000 ($1,160).

Geckos are reportedly exported to Malaysia, China and South Korea, where they are used as aphrodisiacs and as traditional medicine for asthma, AIDS, cancer, tuberculosis and impotence.

Geckos are carnivorous, nocturnal reptiles from the family Gekkonidae that are found in tropical countries. They are known for their sticky footpads that allow them to climb vertical surfaces, including glass.

Wildlife official Mundita Lim said her office has asked law enforcers to look into the possibility that scammers may have infiltrated the trade because of the exorbitant prices being quoted online by buyers demanding geckos weighing at least 400 grams (14 ounces).

Environment Secretary Ramon Paje warned that collecting and trading geckos without permit can be punishable by up to four years in jail and a fine of up to P300,000 ($6,900).

He said a healthy population of geckos was needed to regulate pests and maintain the fragile ecosystem. Geckos feed on insects and worms. Larger species hunt small birds and rodents.