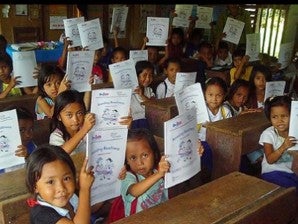 Grade One students in the island of Siasi, Sulu show off theirnew workbooks on Reading Readiness. FILE PHOTO/EQuALLS

COTABATO CITY, Philippines — The Commission on Elections must file charges against people who tried to rig or manipulate the registration of voters in the Autonomous Region in Muslim Mindanao last month to prove it is indeed serious in the campaign to clean up the election process in the region.

This was the challenge thrown at the Comelec by ARMM Acting Governor Mujiv Hataman after Thursday’s assessment of the 10-day voter registration that ended last July 18.

“Go ahead, let’s file charges against them to serve as sample and proof that our electoral reform is not a laughing matter,” Hataman said.

In its report, the Comelec said that many registrants might be eliminated from the final list of ARMM voters after validation of their records.

Some 1.5 million would-be voters turned up for registration in the five ARMM provinces of Lanao del Sur, Maguindanao, Sulu, Basilan and Tawi-Tawi. The old voter lists, which officials sought to cleanse because they were allegedly padded, contained a total of 1.7 million names.

“The drastic decrease only showed that we had a bloated old voters’ list,” Maguindanao election supervisor Udtog Tago said during the assessment.

Tago said that in Maguindanao alone, the number of new registrants was more than 30,000 lower than the old voters’ list of 567,443.

“Shariff Aguak, a known political bailiwick of the Ampatuans, saw a 50 percent reduction,” he said, without providing figures.

Maguindanao, then led by Gov. Andal Ampatuan Sr., gave the Arroyo administration’s senatorial lineup a 12-0 victory in the 2007 elections. It was also one of the ARMM provinces where actor Fernando Poe Jr., a figure immensely popular among Filipino Muslims, got the lowest number of vote when he ran against Gloria Macapagal-Arroyo in 2004.

Hataman said the Comelec should show it has teeth by charging people involved in attempts to rig the voter registration even if those involved were military, police or local government officials.

He said he would back the filing of charges against any personality found to be involved in fraud.

Comelec Chair Sixto Brillantes warned earlier that election officers and other personnel proven to have committed infractions during the ARMM general voter registration would be dealt with accordingly.