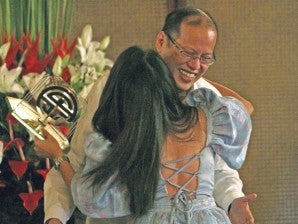 PERKS OF PRESIDENCY President Aquino smiles as Maria Janua B. Polinar surprises him with a hug during the awarding of the Ten Outstanding Students of the Philippines in Malacañang on Thursday. LYN RILLON

Like the song says, a kiss is just a kiss. But 22-year-old Maria Janua Polinar’s peck on the cheek of President Benigno Aquino almost sent the presidential security guards coming to the rescue.

It was a “dream come true” for Polinar, one of the 2012 Ten Outstanding Students of the Philippines (TOSP) awardees, who took the liberty of embracing the President soon after she was handed a plaque in Malacañang Thursday.

A startled Mr. Aquino embraced her, too, but the bachelor President looked rather uneasy.

The crowd of students and academicians at the Rizal Ballroom broke into applause when she suddenly planted a kiss on his cheek.

When asked later if he saw the kiss coming, the President said: “She asked for my permission. She said, ‘Sir, pwede pa-hug (Sir, can I give you a hug)? I replied, ‘No problem.’”

Abruptly changing the topic, he said, “I hope all of them will be successful, including the other finalists, and may their dreams continue to live.”

Polinar explained that she was looking forward to the awarding ceremony in the Palace because of her fascination with the presidency.

“I took political science, so we’re really studying the government … Seeing him in person was, ‘My God! This is the reality!’ This is really political science. You’re studying it, now you’re seeing the physical structure.”

Asked to recall what transpired before the kiss, she fondly recalled asking Mr. Aquino’s permission.

“He said, ‘Sure.’ Before the picture-taking, other higher officials on stage said, ‘You know if the presidential security guards saw you, they won’t really allow you.’ But the President defended me: ‘No, she asked permission, so it’s okay.’”

The meeting with the President became a magical moment for the starstruck Polinar, who is now taking up law.

“I’m starstruck,” she said, recalling that she had felt this way since Mr. Aquino delivered his State of the Nation Address on July 23.

“He was really fighting corruption, reporting on the improvements in government. Meeting him in person, with all those developments in the Philippines, is like, ‘Wow!’”

A multiawarded student leader, Polinar was a trainer and facilitator of the Citizen’s Voter Education program at CMU, and the antidrug campaign “Barkada Kontra Droga Advocacy” of the Philippine Drug Enforcement Agency.

She was also a student parliamentarian.

The TOSP, established 51 years ago, honors students exemplifying exemplary leadership and superior academic performance and actively contributing to nation-building through the auspices of RFM Foundation Inc. in cooperation with the Commission on Higher Education and National Bookstore.

“Thank you for ensuring that the flame of servant leadership and nation-building burns brightly throughout the country,” said Concepcion.

In his speech, President Aquino urged the youth to participate in nation-building by showing compassion and generosity to others.

“God has blessed you … What would you do now? Will you pursue personal gains, or will you look after the welfare of others?” he said.

The chief executive called on the youth to remain committed to initiating and inspiring projects and programs for the country’s progress.