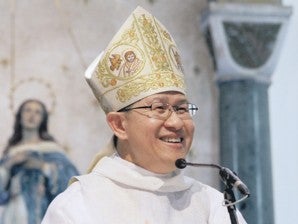 The Catholic Church has started to bring out the big guns in its campaign against the reproductive health (RH) bill.

Manila Archbishop Luis Antonio Tagle on Thursday issued a circular urging the faithful to converge at the Edsa Shrine on Saturday for a Mass and rally against the bill.

“Relying on the power of prayer and the necessity of informed awareness, we will gather together to be informed, enlightened and emboldened once more. We also wish to express why we believe the reproductive health bill is not the solution to our many problems as individuals and as a country as it will even give rise to many other problems more pernicious and pervasive than the ones we face in the present,” Tagle said.

“I enjoin all parish priests and leaders of communities and lay movements to rally their members and endorse participation in this important gathering aimed at communicating a strong and sincere appeal to the goodwill of our legislators,” Tagle said in his letter.

The prayer rally will be a show of force for the Catholic Bishops’ Conference of the Philippines (CBCP) after President Benigno Aquino in his State of the Nation Address (Sona) last week urged the swift passage of the bill, which would provide universal access and information on natural and modern family methods and reduce the number of mothers and babies dying during childbirth.

On August 7, the House will vote on whether to wrap up debate and move the bill forward.  CBCP officials said they would have a vigil at the House on the eve of the vote and that mass actions would also be held in other dioceses.

Time for a vote

President Aquino said Thursday it was time to put the bill to a vote.

“I hope that the point when we need to vote comes. Otherwise, Congress may have already adjourned and we’re still in the period of debate; so we won’t know what the people want. Perhaps the debate should be wrapped up, and we should make a decision on this so-called responsible parenthood bill once and for all,” Mr. Aquino told reporters in an ambush interview.

On the anti-RH rally, Mr. Aquino said: “We’re all prolife, aren’t we? We want an improved quality of life for our countrymen. So that is their right and I’m sure they will not endeavor to do anything against the law. So we will secure this rally if it pushes through.”

Malacañang on Thursday also shrugged off an announcement that former President Gloria Macapagal-Arroyo, who is now a Pampanga representative, will vote against the measure and that seven of her allies had withdrawn sponsorship of the measure.

Communications Secretary Ricky Carandang said that Arroyo and Catholic bishops have been vocal about their opposition to the bill. He said the Church’s invitation to her to join the anti-RH rally should not be given political meaning. Arroyo was freed last week from eight months of hospital arrest after posting bail on election sabotage charges against her.

“I would not want to speak on behalf of the bishops about whether or not this is leading to some kind of support for the former President. This is a measure that should not be viewed in stark political terms because it actually got societal implications,” he said in a briefing.

A vote on the bill should not be seen as a showdown between Mr. Aquino, the bill’s chief campaigner, and Arroyo, Carandang said.

“It’s an important measure and we’re not viewing it in terms of partisan politics. It’s something that we feel is long overdue. It needs to be done, and we’re doing it in that context. I understand that there are observers who are viewing this (showdown) in that way, but we’re simply looking at it right now as a measure that has oppositors, that needs to go through the process and we’ll leave it at that,” he said.

Carandang said Malacañang respected the withdrawal of support by some lawmakers, but did not view the entire anti-RH bill campaign as “Arroyo’s effort.”

“We respect the democratic space in which the debate is being undertaken. At the same time, we hope that our friends in Congress will see the wisdom of this measure,” he added.

While Catholic bishops have counted 140 lawmakers as opposed to the measure based on survey and public consultations, Carandang said it was too early to tell whether the administration had the numbers to defeat them.

“You can never tell until the vote is there. But we are confident that we have support,” he said. “We’re hoping that those of us who are on the administration’s side will continue to support this effort.”