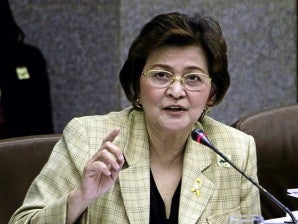 The lawmaker assailed officials of the PCSO on Thursday, during the second hearing on the proposed P2.006 national budget for 2013, for staying at the Philippine International Convention Center (PICC) even if the area was susceptible to flooding.

“Will it still be feasible to hold office at the PICC? Low pressure area pa lang binabaha na. Maybe you should start thinking of relocating to another site (na) hindi binabaha, accessible sa tao,” said Magsaysay.

The lawmaker also berated the PCSO for imposing a dress code for those entering their offices, saying that the agency should not be strict in the said rule and treat people equally despite outer appearances.

“Our constituents can’t all afford to dress up when visiting the PCSO,” she said.

PCSO chair Margarita Juico seemingly bristled at these comments and told the panel that they had very little option other than the PICC after leaving the Quezon Institute.

She said that the PCSO needs building with a 12000 (twelve thousand) square meter floor area and told the panel “if someone can tell me where we can (find that space) we will move.”

“We’re only renting at the PICC. We don’t call the shots,” said Juico, pointing out that they could not do anything if the PICC was strict about dress codes.

She said that they were eyeing a PCSO property which might be big enough for the construction of their own building but until that could be realized, they were staying at the PICC.

“I encourage congressmen to look at the Lung Center where all patients are treated as private patients and there are no dress codes. Guarantee letters are released the same day unless they need bigger amounts,” she said.

“If you can just pull yourselves together, we can give you a tour,” said Juico.