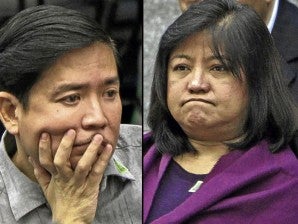 SQUIRMING in their seats, former PCSO officials Manuel Garcia and Rosario Uriarte struggle under questioning from senators who refused to excuse them on humanitarian grounds. LYN RILLON

Two former officials of the Philippine Charity Sweepstakes Office (PCSO) on Thursday invoked family, public ridicule, poor health and their constitutional right against self-incrimination at the congressional inquiry into the alleged misuse of agency funds.

“The adverse public perception, which I and my family continue to endure, and worse, my indictment for a serious crime, have become unbearable and prejudicial not only to my family but (also) to my rights under the Constitution,” Uriarte read from a prepared statement.

“Have mercy on my family, not to me anymore,” she said.

Uriarte, who may face plunder charges for her role in the allegedly illegal disbursement of some P325 million in PCSO intelligence funds, said she was willing to appear at the proper forum where she “can confront the witnesses.”

Uriarte testified before the blue ribbon committee on July 7 that then President Gloria Macapagal-Arroyo signed PCSO board resolutions in 2008-2010 approving the allocation of hundreds of millions of pesos in charity funds for intelligence operations.

Garcia, who is accused of getting more than P1 billion in kickbacks from the agency’s ad placements during the Arroyo administration, said he had been advised by his lawyer not to discuss the matter anymore, owing to the separate tax evasion and criminal cases filed against him. He denied the allegation.

“I plead to be excused from this investigation not only because of those cases… but also for humanitarian reasons,” Garcia said, his voice cracking.

“I am very sick. I am suffering from acute hypertension. My doctors advised me to avoid stressful situations. This investigation is very stressful and it can be life-threatening to me, more so because of the seriousness of the allegation against me,” Garcia said.

But Senator Teofisto Guingona III, the blue ribbon committee chairman, reminded both Uriarte and Garcia that they could not invoke a “blanket” right against self-incrimination.

Sen. Franklin Drilon later interrogated Uriarte, who was also suffering from hypertension, on the P4.5-million increase in her assets from 2007 to 2008, based on her statement of assets, liabilities and net worth.

Uriarte replied that her ITR did not include the allowances she had received from the PCSO, which, combined with her salary, amounted to about P2.6 million.

But she said PCSO accountants had told her that the allowances were not taxable and did not have to be declared in the ITR.

“I will accept (the explanation) at face value,” said Drilon, who then asked Uriarte to explain the discrepancy between her P2.6-million earnings and the P4.6-million increase in her assets three years ago.

Uriarte chose to remain silent, but she later readily agreed to submit her bank records during the years in question in subsequent committee hearings.

Guingona also sought to dig up pieces of properties owned by Garcia in connection with the ad kickbacks he had allegedly pocketed from complainants Alexander Quisumbing and Ludovico Yuseco, two ad executives who used to transact with him.

Last week, Quisumbing, the chairman and CEO of Quizgem, and Yuseco, the manager of Cross-Channel Advertising, told the Senate committee that Garcia had demanded a 40-percent kickback from the contract price, less the 12-percent value-added tax and the 10-percent withholding tax.

Quisumbing confirmed what he stated in his May 18 affidavit that he gave Garcia some P16.1 million from 2006 to 2008.

Yuseco also confirmed his May 18 affidavit that he gave the former PCSO advertising and promotions manager P12.6 million from 2008 to 2010.

At Thursday’s hearing, Guingona came up with a PowerPoint presentation showing pictures of Garcia’s house in Barangay (village) Don Manuel in Quezon City, a Toyota Fortuner, a BMW 350 and a Honda Civic.

Guingona apparently wanted to provide the contrast between the properties and Garcia’s monthly salary of only around P70,000 monthly at the PCSO.

Garcia said the house had been inherited from his father-in-law, while the Fortuner had been purchased as part of a PCSO car plan.

He said the BMW belonged to his daughter, while the Civic was owned by his son, who was in the car buy-and-sell business.