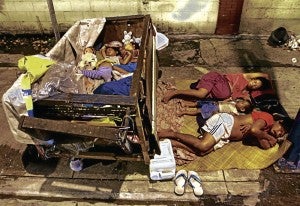 SOCIAL MOBILITY The government has identified 4,000 to 5,000 families living on the streets of Metro Manila since 2010. EDWIN BACASMAS

The Department of Social Welfare Development (DSWD) will try to wean this month some 700 street-dwelling families in Metro Manila off their “nomadic” living conditions.

But Social Welfare Secretary Corazon Soliman admitted that the agency might face difficulties in implementing its “modified” Conditional Cash Transfer (CCT) program for the homeless in the National Capital Region.

Speaking to Inquirer editors and reporters on Tuesday night, Soliman said social workers would have to convince families living on sidewalks, who usually have nothing but their kariton (pushcarts) as makeshift shelter, to move to permanent settlements.

“We are working on helping them get used to the idea of having a permanent, stable place because once they get used to life on the streets, you will be surprised—they never want to leave,” she said.

The DSWD chief cited a case wherein social workers spoke with a street child to encourage her family to enroll under the modified CCT.

“We were offering livelihood and also a place to go home to. But she refused and told us they already like where they are (a cart parked at a street corner) because they earn their living there. We have to understand that life on the streets is different,” she said.

Soliman stressed that they see the modified CCT as a medium-term solution to curb vagrancy and put a stop to what she called a vicious cycle.

“It is a better solution than taking them off the streets, giving them fare to go home, and finding later that in less than three months they are back. If you relocate them and there is no livelihood, they sell the rights to the house and come back,” Soliman explained.

The pilot launch of the modified CCT will target 700 street families in the capital out of some 4,000 to 5,000 kariton families who have been identified by the agency since 2010.

“We identified families who we know continue to return to the same sidewalk and sleep there,” the secretary said.

Under the modified CCT, each family will be provided P300 a month. In return, the parents must send the children to an alternative learning program and the family must attend values formation sessions conducted by the DSWD.

“There are many beneficiaries who have told us that one of the biggest support they received was the family development sessions where they learn techniques in parenting. (Wives) also learn to negotiate with their husbands because of the gender development aspect of the curriculum,” she said.

Also, Soliman said, “we will be providing them P2,000 to P3,000 as rent money and put them in the defunct Guwapotel.”

Soliman was referring to the residential building in Manila which was used in 2008 by the Metropolitan Manila Development Authority to provide affordable lodgings for low-income workers and travelers.

She explained that street families were previously excluded from the CCT program since its initial focus was on beneficiaries with permanent addresses and who had children regularly going to public schools.

The CCT—also known the Pantawid Pamilyang Pilipino Program (4Ps)—is defined by DSWD as a rights-based social development program of the national government to reduce poverty by providing poor families, with children aged zero to 14 years old, with conditional cash grants of P1,400 monthly for five years.

To get the grants, beneficiaries must enroll their children in school, ensure that they undergo regular health checkups and vaccinations, and attend monthly family development sessions.