Showdown on RH bill up 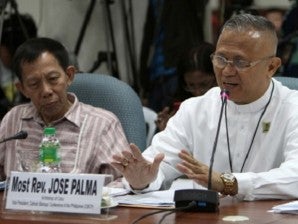 The name of the game is numbers and the bishops are confident they have it wrapped up.

The Catholic Bishops’ Conference of the Philippines (CBCP) said the reproductive health (RH) bill will not pass the House of Representatives when it takes a vote on the measure on August 7.

CBCP president Jose Palma on Tuesday said the bishops expected victory in their fight against the RH bill, counting 140 congressmen opposing the measure and only 49 favoring it.

Antipolo Bishop Gabriel Reyes said the CBCP leadership recently asked its members to talk to their district representatives about their position on the bill, which seeks universal reproductive health care in the Philippines.

The results of the survey and discussions in the country’s 85 dioceses showed that lawmakers were against the bill, Reyes said.

“Of the 215 congressmen surveyed by the bishops themselves, only 49 will vote yes to the RH bill, 140 will vote no to the RH bill and 26 are undecided. We are happy about that and we hope that they will not change their minds,” he added.

There are 285 district and party-list representatives in the House. For a bill to be passed, it needs a majority vote from the lawmakers.

On Monday, Minority Leader Danilo Suarez said eight lawmakers, who are coauthors of the bill, would withdraw their support for the measure. Suarez declined to identify the legislators.

The House leadership has organized a “text brigade” to get its membership to show up for the vote that will decide once and for all whether or not to terminate the debates on the bill.

Should the discussions be concluded, the House would move to amendments and then to another vote on whether to pass the measure on second reading.

“This is not yet an approval, mind you,” said Speaker Feliciano  Belmonte.

“This is a step forward. It will give us at least the time to consider the bill up to the third reading,” he told reporters.

He said enough members would show up on August 7 so that there would be a quorum.

If there is no quorum, this would mean that the bill has no support, said Majority Leader Neptali Gonzales II.

Senior Deputy Majority Leader Janette Garin shrugged off the bishops’ claim the bill would be rejected.

Garin said it was difficult to speak of exact numbers until an actual vote is made, so it would be better to wait for that.

“We are still confident [of getting the vote],” she said.

About a dozen members of the Interfaith Partnership for the Promotion of Responsible Parenthood have expressed support for the bill. The group is spearheaded by the Iglesia ni Cristo. “We are ready to support the bills on reproductive health as long as there would be no immoral elements in them,” said Iglesia executive minister Eduardo Manalo in an Oct. 12, 2010, letter to Congress.

“There is no dissonance between Catholicism and the belief that reproductive health should be a right,”  Bicbic Chua, director of Catholics for RH, said in March.

Palma, who is the archbishop of Cebu, said the CBCP hoped that more and more lawmakers would oppose the bill.

The CBCP is hoping that the undecided lawmakers will be swayed to go against the bill before the August 7 vote on the proposal. The CBCP is launching a Mass prayer rally at the Edsa shrine on Saturday. It also plans to hold a vigil at the House on the eve of the vote.

The RH bill seeks to provide couples information on various family planning approaches, including modern contraception methods that the Church opposes. The bill also seeks to mandate wider reproductive health education in schools and government health centers. According to its supporters, the bill does not support or allow abortion, nor does it promote promiscuity.

The health department is one of the advocates of the RH bill. It noted that the bill would reduce maternal and child deaths in the Philippines.

No movement in Senate

Senator Pia Cayetano on Tuesday expressed frustration over what she called the Senate leadership’s attempt to prevent the passage of the population management measure despite the priority given to it by the Aquino administration.

Failure of the bill to move in the Senate would doom the House initiative.

“It’s sad that in the Senate, we can take a stand on issues like impeachment and have political will. But just because the two highest officials in the Senate are against it, should they use their position to prevent the measure?” Cayetano told reporters.

“Shouldn’t they detach themselves from their personal views and their function? In other words, allow [the bill] to take its course,” she added, referring to Senate President Juan Ponce Enrile and Majority Leader Vicente Sotto III.

Cayetano said she could endure endless questioning on the measure but said that those questions that had been answered should no longer be asked.

“I’m a marathoner, I’m a triathlete, I’m an endurance athlete and I’ve endured the questions that have been repeatedly asked,” Cayetano said.

“Is it correct to use the Senate’s time, the time of its employees, the time of the reporters, the air-conditioning, the lights here, the resources of the Senate [just] to ask questions that have been repeated many times? They can read them in the journal,” she said.

Told that Enrile had expressed the view that the responsible health bill was still unripe for approval, Cayetano said, “Because during his time there was no RH (problem). So, it is hard to accept that this time, there is a need for it,” she said.

“That’s why the Senate is a dynamic body. We are made up of young and old, women and men, with different backgrounds, so that we can move forward with ideas,” Cayetano said.