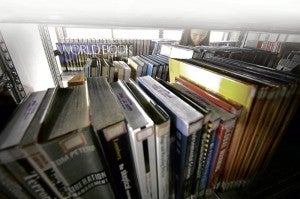 TUCKED in a corner of Burnham Park, the Baguio City public library offers students and residents a collection of books and magazines covering a variety of subjects.

BAGUIO CITY—One afternoon, 7-year-old Shaira Myr Balasi was so absorbed in a book she was reading at the Baguio City public library that she didn’t mind the rainy, cold weather. She was on Page 16 of “Nature’s Patterns: Plant Life Cycles,” a science book for children, when the Inquirer interrupted her for a chat.

The book talks about how seeds grow, and she was on a page where “germination” is defined and illustrated. “Science books are among my favorites,” she said.

She is also particularly interested in scientific interventions and inventions. She is amazed at how important modern tools and gadgets, such as telephones, electric bulbs and airplanes, are made.

“What I read about these, I supplement them with what I watch on Discovery Channel,” she said. 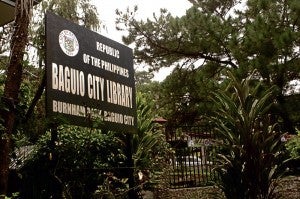 She watches television, too. “I choose what I watch and I can’t leave [the habit of] reading,” said the second grader at a Catholic school.

Balasi then bared the value of reading in her life by sharing a story of a king in a big castle who chose to be surrounded by books. She quoted the king as saying: “What use is my big castle without books in it. I’d rather live in a poor man’s hut as long as it is filled with books.”

“It’s OK to have a television and a transistor radio, which deliver us important news,” she said. “Other than these, I’d rather have books.”

Librarian Fe Requilman said Balasi, a daughter of a City Hall employee, is one of the regular users of the library’s children’s section. “Every weekend or during summer, her mother would leave her here and she would quietly spend her time on books,” she said. 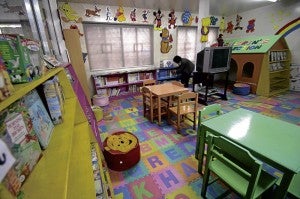 THE CHILDREN’S section of the Baguio public library. PHOTOS BY RICHARD BALONGLONG

Balasi said she owed her reading habit to her mother who enrolled her when she was 4 at a tutorial school, which stresses mastery of reading and mathematics.

But Balasi is no nerd. She is “a normal kid” who plays outdoor games with children her age in their neighborhood in Barangay Puguis in La Trinidad, Benguet, she said.

As a pupil, she has an edge over many of her classmates. “My teacher often assigns me to lead reading and spelling lessons in our class,” she said.

This early, she has already three choices to pursue in life. “My first choice is to become a librarian,” she said. “I’m also considering taking nursing or medicine.”

The importance of public libraries in molding dreams of young people like Balasi cannot be underestimated. Until 1982, the city public library had no budget so it depended on whatever books the National Library gave.

“To the credit of Mayor Mauricio Domogan, he began to allocate an average of P1 million yearly for the purchase of books for our library,” Requilman said.

Domogan also raised funds for a new three-story building, which houses the library at a corner of Burnham Park, she said.

Some educators say Domogan, the once barefoot orphaned schoolboy from the remote village of Patiakan in Quirino, Ilocos Sur, must have better appreciation of the importance of public libraries than other city officials.

On foreign magazines alone, some P300,000 is spent yearly, she said. These include Time, Newsweek, National Geographic and other publications on architecture, geography, agriculture and technology.

The city library is also building up its law section. An average of P72,000 is allotted yearly for law reviewers and law textbooks, Requilman said.

Law students frequent the city library for the Supreme Court Reports Annotated (SCRA), which are regularly updated. Also most patronized by nursing and medicine students is the medical section, which, Requilman said, contains up-to-date reference books.

It has a gender and development (GAD) section, while its American shelf has updated books and journals about biodiversity and climate change, courtesy of the US embassy.

And based on a memorandum of agreement between the Commission on Higher Education (CHEd) and the city government, copies of all dissertations and theses from colleges and universities in the Cordillera, the Ilocos and Cagayan Valley would be deposited at the Baguio public library.

At the provincial library in La Trinidad, chief librarian Zenia Biang takes pride in its medical, health and law books, which have been patronized by nursing, medicine and law students reviewing for the board and bar examinations.

The library has a reviewer’s section with an individualized cubicle designed for a user’s privacy.

Also most patronized by both undergraduate and postgraduate students, and seminarians are the books on local history and culture, Biang said.

For both the provincial and Baguio public libraries, a source of hope for the future are children who have developed a love affair with books.

“In between breaks or dismissal, grade schoolchildren would come to read books with pictures such as ‘Ibong Adarna’ collections or illustrated science books,” Biang said.

As long as there are children like Balasi, who would want to get absorbed in a book at the rubber-matted children’s section, Requilman said libraries with books, which could be turned from page to page, are not about to give way to things digital.