It’s back to work for Arroyo 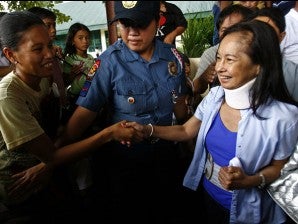 This is the first time after nearly eight months of detention at the Veterans’ Memorial Medical Center that the lawmaker has attended a session at the Batasan Complex.

Members of the minority bloc, led by its leader Danilo Suarez and Occidental Mindoro Representative Amelita Villarosa, rushed to the former chief executive’s side when she stepped into the session hall at 4 p.m.