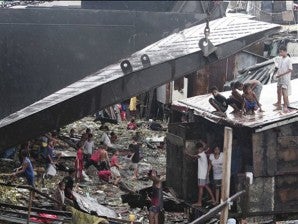 Residents salvage pieces of their homes after two empty barges rammed into shanties on stilts at a poor community in Manila, Philippines, Monday, July 30, 2012. Dozens of shanty houses were destroyed as strong winds and waves made the huge barges to ram shanties nestled along the coastline of the Manila bay. AP/Aaron Favila

Tropical Storm “Gener” claimed the lives of at least four people as it roared off northeast Luzon and dumped heavy rains on large areas of the country. Another six were missing, according to disaster officials.

Three of the four fatalities drowned—one each in Cavite, Batangas and Romblon provinces. The fourth fatality died in Laguna province when a coconut tree fell on his house.

A motorboat sank off Batangas province and a ferry ran aground in Looc, Tablas Island.

A combination of low pressure area (LPA) and southwest monsoon, which the weather bureau found “strange,” toppled billboards, uprooted trees in the metropolis and nearby areas, and cut off the power supply to Manila Electric Co.’s customers.

Classes and offices were suspended and flights were canceled and diverted from Ninoy Aquino International Airport.

As of 2:30 p.m. Monday, Malacañang suspended classes in all colleges and universities in Metro Manila. The Palace also suspended work in government offices in the metropolis.

Due to bad weather, at least eight domestic flights were canceled and 12 other flights were diverted to Diosdado Macapagal International Airport.

Uprooted trees in Mckinley Hills in Taguig City, Hemady Avenue in Quezon City and Roxas Boulevard in Pasay City kept Metropolitan Manila Development Authority personnel busy as they removed tree trunks away from the roads to ease the traffic flow.

The National Disaster Risk Reduction and Management Council (NDRRMC) advised residents of low-lying communities in Quezon City, Marikina City and in Cainta, Rizal province, to be ready to leave their houses as two gates of Ipo Dam released water Monday.

More than 700 people voluntarily left their homes in a barangay (village) in Marikina Monday after the city’s main river system threatened to overflow as a result of heavy rains.

The voluntary evacuation of the 404 people from Barangay Malanday was in stark contrast to the resistance by several residents to appeals by officials that they leave their houses in 2009, when Tropical Storm “Ondoy” battered the metropolis.

Later in the day, 323 more people from the barangay also voluntarily left their houses. The NDRRMC’s latest bulletin said 14,303 people had been staying in 17 evacuation centers in seven provinces.

In Cagayan, heavy rains the past two days swelled the Cagayan River and its tributaries, rendering at least three bridges impassable to vehicles. On Monday afternoon, ferry services at the 420-meter Magapit suspension bridge in Lal-lo town were suspended.

Reports said floodwaters in at least 36 villages in Obando, Balagtas, Hagonoy, Marilao and Meycauayan City rose to between 6 inches and 3 feet.

Gov. Enrique Garcia asked the Bataan PDRRMC to prepare for relief operations in flooded areas, especially in at least five villages in Hermosa town where water had risen to about 3 feet. Floods also hit several villages in Dinalupihan, Samal and Mariveles towns.

In Bugallon town, at least 200 families from three villages were evacuated on Sunday night.

Heavy rains and stormy seas sank at least two vessels—one in Romblon province and another in Batangas province—and flooded and destroyed properties, roads and bridges in a number of towns in Rizal, Laguna, Cavite, Catanduanes and Occidental Mindoro provinces.

Landslides and trees toppled by strong winds were reported in several parts of Calabarzon. A house was damaged when it was hit by a fallen tree in Barangay San Isidro, Antipolo City.

In Cavite province, Rosario, Noveleta and Kawit towns suffered knee-deep floods. Two families from Mabitac, Laguna, were evacuated from their homes as water in the Mabitac river rose.