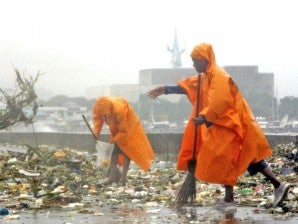 AFTER THE STORM Even before the rains and winds died down, members of the Manila engineering office start removing tons of flotsam left by huge waves along the Manila Bay boulevard early Monday at the height of Tropical Storm “Gener.” NIÑO JESUS ORBETA

The Philippine Atmospheric, Geophysical and Astronomical Services Administration (Pagasa) on Monday said it did not expect winds reaching 60 kilometers per hour, typical in areas under Storm Signal No. 2, would hit the metropolis.

“We anticipated that the southwest monsoon would bring rains and winds and issued a gale warning but what we missed was the strength of gustiness,” said Pagasa forecaster Jori Loiz.

He said no storm warning was raised because the wild weather lasted for just two to three hours.

“The strength of the wind was strange. We knew that there was an enhancement of the southwest monsoon but we were surprised by the wind force registered. It was typical of storms. It was 60 kph. A tropical depression would bring 55 kph winds. Last night (Sunday) was almost Signal No. 2,” Loiz said.

As of 4 p.m. on Monday when Pagasa classified Gener a typhoon, its center was spotted at 260 km east of Basco, Batanes province. It was moving north-northwest at 7 kph, with maximum sustained winds of 120 kph near the center and gustiness of up to 150 kph.

The typhoon’s cloud band covers a large area as it has a diameter of 700 km. Satellite photos yesterday morning showed that clouds covered the entire country. Within Gener’s clouds, the rainfall was expected to be between 10 mm and 20 mm per hour, categorized as heavy to intense.

“We had been monitoring the thick clouds moving toward Central Luzon but we did not include that in our 5 p.m. weather bulletin last Sunday because at the time, it was not yet qualified to be called a low pressure area (LPA),” Loiz said

He said Pagasa included the “shallow” LPA only in its 11 p.m. bulletin “because by then it had developed fully.”

Loiz described Sunday night’s weather disturbance in Metro Manila as a monsoon surge in which the southwest monsoon merged with the shallow LPA.

Loiz said the shallow LPA was embedded in the clouds and was engulfed by the strength of the southwest monsoon. This was unusual, he told the Philippine Daily Inquirer, since LPAs usually stay on the edges.

“Gener gained strength and enhanced the monsoon, the effects of which we have been feeling for several days like occasional to frequent rainfall and gusts,” said the weather forecaster.

Loiz told the Inquirer that he had not seen a pattern similar to what was experienced on Sunday night. He likened the shallow LPA to a boat that was sent adrift on a river but went inside the thick clouds that the southwest monsoon had absorbed.

The LPA had dissipated by midday.

As of Monday, Signal No. 3 was hoisted over Batanes where winds of 101 kph to 185 kph were expected for at least 18 hours. Signal No. 2 was in effect in Cagayan, including Calayan and the Babuyan Group of Islands, where stormy weather packing winds of 61 to 100 kph were expected until Tuesday.

Signal No. 1 was hoisted over Isabela, Kalinga and Apayao provinces where rains and gusty winds of 30 kph to 60 kph were expected for the next 36 hours.

The weather bureau advised residents living in low-lying and mountainous areas to be on alert for flash floods and landslides, while those living along coastal areas under Signal No. 2 should be on guard against big waves or storm surges.

Sea travel in these areas is risky. Fishing boats and other small vessels are advised not to venture into the seaboards of central and southern parts of Luzon, the Visayas and eastern Mindanao.