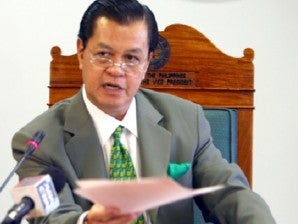 “Our journalists and anchors, including Noli de Castro, report the news as they see it. They enjoy editorial independence in their coverage, and in the way they tell stories. The credibility of our news organization rests on this, as well as other basic journalistic principles,” said Ging Reyes, ABS-CBN News chief.

“In instances in which our fairness or balance is questioned, we have internal mechanisms that address such complaints from viewers,” said Reyes, who did not say whether it would act on the President’s complaints without waiting for him to file a complaint.

Reyes said any complaints against their news reports or personnel were usually turned over to their in-house ombudsman for investigation.

President Aquino, invited as the guest of honor at the 25th anniversary celebration of ABS-CBN’s TV Patrol at Manila Hotel on Friday, used the occasion to attack De Castro.

He said negativism in media was holding back the country’s progress.

In remarks that caused an uneasy silence among the party crowd, Aquino singled out the TV Patrol anchor and former Vice President for undue negativism and voicing “baseless speculations.”

He minced no words in saying that many of the problems he faced he had inherited from the previous administration of Gloria Macapagal-Arroyo and De Castro as Vice President.

Aquino came prepared with examples of De Castro’s alleged bias. He recalled a news report about the rescue of a child by the National Bureau of Investigation wherein De Castro quipped that the rescue may have been a set-up.

De Castro has not commented.

In a previous statement, Reyes brushed off the President’s criticism: “There are no bad feelings, there is no room for being too sensitive. We believe that many will criticize us because not everyone is happy about what we report and come out with in TV Patrol.”

“It’s a good and bad thing actually. It’s bad that the President himself made the criticism but it’s also good for us because it shows that we are not biased towards this administration as most of our critics claimed in our coverage of the Arroyo arrest and Corona impeachment,” said Reyes in a phone interview.

In a briefing, deputy presidential spokesperson Abigail Valte said, “We are only asking you to give equal attention to good news because we also have good news that we should report.”

Earlier, Presidential Communications Operations Office head Ricky Carandang, a former employee of ABS-CBN News, clarified that the President’s verbal jabs were directed at De Castro and not the network.