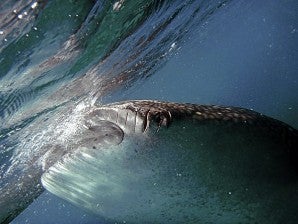 ENVIRONMENTAL groups have renewed calls to stop the feeding of whale sharks in the waters off Oslob town, southern Cebu, after “Fermin” suffered 11 wounds believed to have been caused by boat propellers. CONTRIBUTED PHOTO

The butanding turned out to be “Fermin,” one of the whale sharks that regularly approach the bancas to be fed by fishermen and tourists in the waters off Oslob town, 117 kilometers south of Cebu City.

According to marine researchers, Fermin suffered deep cuts that might have been caused by boat propellers, renewing calls to stop the practice of feeding the whale sharks, which has become a major tourist attraction in Oslob.

The practice doesn’t only diminish the whale sharks’ ability to hunt for food, but it also puts them at risk of getting hurt like what happened to Fermin.

Dr. Alessandro Ponzo, president of the Italian marine research organization Physalus, said Fermin was seen on
June 20 in the water off Barangay Tan-awan, Oslob town, with “very deep propeller cuts on the head.”

Physalus initiated the Large Marine Vertebrates Project (Lamave) in the Philippines in 2010. The project pushes for conservation of marine animals through education and research, and works with government agencies to reach out to communities and the private sector. It started its marine research efforts in Bohol province and later expanded to the neighboring provinces of Negros Oriental and Cebu.

Lamave researchers are in Oslob to check on Fermin. Samantha Craven, Lamave’s principal investigator on the Oslob Whale Shark Project, said Fermin suffered 11 cuts including a wound that cut across his left eye. They could not yet tell the extent of the damage to the eye.

She said sharks were fast healers so they continue to monitor Fermin’s healing. “People should know that it is wrong to treat the wounds of wildlife with our medicines. A lot of them are allergic to our medicines and that may cause harm and slow down the healing process,” said Craven, a marine biologist who is half-Filipino and half-British.

Fermin’s presence along with six other whale sharks in the waters off Oslob have enticed tourists to visit the southern Cebu town to interact with the “gentle giants.” Local fishermen with some tourists on board paddle boats and feed the whale sharks with baby shrimps, locally called “uyap,” as they swim around the designated interaction area, which is about 30 meters from the shoreline.

Interaction is between 8 a.m. and 1 p.m. so the whale sharks can “rest.” Motorboats are not allowed in whale watching.

Whale shark feeding has become a major tourism attraction and income-earner of Oslob, a fourth-class municipality with a population of about 26,000 based on the 2010 census.

But the practice has long been opposed by Aca and Lamave researchers because it disrupts the whale sharks’ natural feeding behavior.

He said discussions about Oslob’s new tourist attraction didn’t focus on the whale sharks but only on the activity’s tourism potential.

“Whale sharks exhibited head scratches and scrapes from bumping into feeder boats. In addition, they have been observed to seemingly associate bubbles from divers and snorkelers with food,” he said in his letter.

“While this behavior is already accepted and understood by the fishermen of Oslob (who are not allowed to use motorboats to protect the whale sharks), it might pose a different situation once these migratory whale sharks move outside of Oslob,” he added.

In the case of Fermin, Aca said the whale shark’s usual approach of bumping the boat from behind might be seen as an aggressive behavior by other fishermen, causing them to turn on their motors and leave. Fermin might be hit by the propeller causing the wounds, Aca said.

“There surely is some kind of overlapping task between these agencies but instead of pointing to each other and/or claiming responsibilities, it is always beneficial if both can work together to achieve a certain goal,” he said.

Physalus’ Lamave project has identified over 60 whale sharks in the interaction area of Tan-awan, Oslob. Ten of them are seen daily, an increase from the six seen last April.

In its statement, Lamave said the number of propeller scars on the sharks in Oslob had increased since June although not as grave as what happened to Fermin.

They also expressed concern over the intent of neighboring municipalities like Moalboal, which is currently discussing an ordinance for whale shark interaction with intent to feed.

Craven said Fermin was the first of the whale sharks to obtain serious injury but this number could increase as sharks continue to develop the behavior of associating boats with food.

“The spread of feeding activities to other municipalities would exponentially increase the number of sharks learning this behavior, and thereby exposing a greater proportion of the whale shark population in the Visayas to serious injury,” Lamave said in its statement.

Craven said they would continue to work with the local community to raise awareness and education about marine life. “There is still not enough education and awareness about the butanding. A lot of people still call them whales. There has to be a collaborative effort among all people to make this more sustainable,” said Craven.