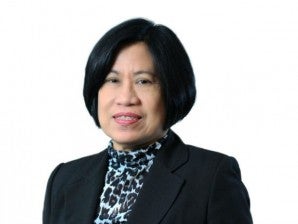 MANILA, Philippines–Securities and Exchange Commission Chair Teresita Herbosa on Friday said she accepted nomination for Chief Justice because “unusual times call for unusual solutions,” adding that the Judicial and Bar Council should consider short-listing candidates even though they are outsiders or did not have experience in the judiciary.

The lawyer, however, acknowledged that it would “take a leap of faith” on the part President Aquino to appoint her to the “exalted position” of Chief Justice.

“I feel I have all the qualifications and these unusual times call for unusual solution and I believe that when it comes down to the bottom line, whether an insider or outsider, it does not really matter, it’s more whether the person is equipped with the skills to be able to unite or lead the group to overcome the present crisis and go for a common goal,” she said.

Herbosa pointed out that the Constitution does not bar an outsider or one having no experience in the judiciary from being appointed to the Court.

The 62-year-old Herbosa was the first of the four nominees to face the JBC on Friday, the fourth and last day of the nationally televised hearings to choose the successor of ousted Chief Justice Renato Corona.

She said a “Herbosa Court” would be one that will be accessible to all people, where there are no delays and where cases would be decided on merits; and one which give everyone fair and equal treatment. She said her goals for the Supreme Court were “no different from any man’s.”

Herbosa said her judicial philosophy is strict adherence to the Constitution, keeping in mind the intent of its framers, and avoiding “undue interference” in the functions of other branches of government except in cases of abuses. She said she would be more on the side of judicial restraint and not judicial activism as she thinks the Constitution is “adequately worded.”

The SEC chair also spoke about the need for the new Chief Justice to be able to lead or muster everyone in the judiciary through the so-called “transformational leadership.”

“In the end, it’s not the leader who would determine where the direction would be but also those under him and it’s his job to inspire and motivate them to realize there is a common goal and they should consider pursuing that over their personal interest,” she said.

She said “it would not take a lot” in doing so, considering that the current members of the Court are “respectable people.”

Though she has what she called “a strong personality,” Herbosa said she knows the value of consensus building, possess persuasive skills, and gives giving credit to whom it is due.

However, she argued that more than academic credentials, candidates should be chosen based on their effectiveness and sincerity in offering solutions to the problems facing the Supreme Court and the judiciary.

Herbosa has been SEC chair since April last year. Before that, she was a litigation lawyer for 33 years under the prominent Angara Abello Concepcion Regala and Cruz (Accra) law office, where she served as the first female co-managing partner.

While at Accra, she represented farmers’ group Cocofed in the coconut levy cases.

Two personal details surfaced during Herbosa’s interview: her being a member of the family of the national hero Jose Rizal and her being still single at her age.

A great-granddaughter of Rizal’s sister Lucia, Herbosa was asked what qualities of the national hero she wanted to put to good use if she is appointed Chief Justice. She replied by relating what her grandfather, who was one of Rizal’s students during his exile in Dapitan, told her.

“You are not entitled to any advantage in life. You have to work for everything you want, but in the process, you are not supposed to step on the shoes of other people and should not be unfair and unjust,” she said.

She also said like Rizal, she is “very thrifty,” is willing to do manual work and recognizes the value of youth development.

Asked if she was single by choice or by accident, Herbosa said she is used to living alone. She said that as a single, female Chief Justice, she would have more time to prepare for decisions, read and do other jobs.

Herbosa also said the JBC ought to relax its rules on disallowing applicants with pending disbarment and administrative cases to the judicial posts.

The SEC chair said she was not able to apply or get nominated because of one disbarment case filed against her before the Integrated Bar of the Philippines which took a long time getting resolved.

“There are people who would adopt the strategy of intimidating lawyers [by filing disbarment cases]. It is so unfair but is part of the hazards of the job,” she said.

Asked about her plans to make the judiciary more gender-sensitive, she pointed out that the personification of Justice, is that of a blindfolded woman. She the judiciary should be sensitive not only to the needs of women but also to the underprivileged and the weak.

To curb the lack of judges, Herbosa said law schools should start preparing law students interested in becoming judges, and to give more pay or implement rotation in assigning judges in faraway provinces.

She said law students should also be encouraged to take up mediation subjects because the alternative resolution of disputes would help in decongesting court dockets.

The dockets could also be de-clogged if only lawyers are frank and honest enough to tell a client that the case he wants to file is not meritorious or that the dispute may be resolved by other means than litigation.

“Some lawyers would ‘overpromise’ and ‘underdeliver.’ Then if they lose the case, they would tell the client that the judge got paid by the other party,” she recounted.

Despite being a Catholic, Herbosa said she was in favor of divorce law. She also said the bases of annulment of marriage should also be similar to those in Church annulment cases.