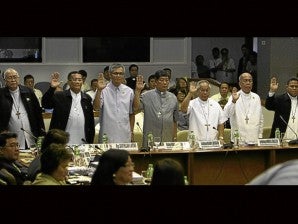 The reverential treatment of Catholic bishops began Wednesday with Sen. Miriam Santiago’s declaration that “no constitutional violation” was committed with the disbursement of Philippine Charity Sweepstakes Office (PCSO) funds for the purchase of the prelates’ vehicles.

Santiago was allowed to deliver a speech at the start of the hearing of the Senate blue ribbon committee on the alleged misuse of PCSO funds in the acquisition of the vehicles.

“The basic purpose of the grant of public funds is clearly stated on the face of the checks (issued by the PCSO) themselves: ‘purchase of service vehicles to be used by the diocese in its various community and health programs.’ If there is any benefit to the bishop and the diocese, it is merely incidental,” Santiago said.

Some senators said last week that the grant of donations to the bishops for the purchase of vehicles violated the constitutional provision prohibiting the State from favoring a particular religion.

Santiago blasted parties she said were eager to invoke the Constitution against the bishops when it was the Supreme Court that can decide the constitutionality of the cash grant that allowed the bishops to purchase vehicles.

Despite Santiago’s spirited defense of the bishops, the prelates were decided on returning the vehicles to the government.

Shamed by reports that they were riding sport utility vehicles (SUVs) bought with charity funds for their personal use, three bishops based in Luzon brought the vehicles when they appeared before the Senate inquiry into the matter for turnover to the PCSO.

Their four colleagues from Mindanao, including one who asked in 2009 then President Gloria Macapagal-Arroyo for a Mitsubishi Montero as a birthday gift, swore they were ready to hand these over to the PCSO.

After hearing their explanations, Senators Vicente Sotto III, Panfilo Lacson and Jinggoy Estrada, and Senate President Juan Ponce Enrile urged the bishops to reconsider their decision to return the vehicles.

But the bishops stood their ground.

“We met and we said that I think that the wisdom of the bishops’ conference is correct that even if it is not unlawful and even if it is not unconstitutional, we believe that it is important for us to clear everything in the air and return the vehicles,” Quevedo said.

“We think that we can do our job without encumbrance of the political or any reason whatsoever that has given shame to the whole conference,” he added.

Clergymen in civilian clothes and members of various organizations under the Catholic Church filled the Senate gallery to express their support for the six prelates.

One senator admitted receiving a telephone call before the hearing asking him to go easy on the bishops who would attend. He said the caller warned it would be “difficult to go against the Church hierarchy.”

In her speech, Santiago took the Commission on Audit (COA) to task for filing a report in 2009 saying the grant of P6.49 million to certain dioceses of the Church violated the Constitution.

“The COA report said that this action was a violation of the constitutional provision that no public money should be appropriated, directly or indirectly, for the use of any church,” said Santiago, chairperson of the Senate constitutional amendments committee.

“Under the Constitution, the power of the COA is to audit government funds, not to settle questions of constitutional law. The power is granted only to the Supreme Court,” she said.

She said the COA, instead of declaring the donations to the bishops as unconstitutional, should have instead recommended that the constitutional issue be raised in the Department of Justice, the official legal adviser of the executive branch of the government.

She warned that it would be the PCSO, and not the bishops, that would have to explain why it appeared to be favoring Catholic leaders.

While the CBCP had apologized for the controversy, the bishops maintained that their receipt of the funds for the purchase of the vehicles was not unlawful.

“We’re very grateful for the help extended to us. Still, we have not violated any law or the Constitution,” Quevedo said in an opening statement.

The vehicles were hardly the sleek SUVs that the PCSO had described them to be.

Four dirt-splattered vehicles, driven through mountainous, rough terrain from Mt. Province, Abra and Ilocos Sur, were brought to the Senate on Wednesday.

The four vehicles were parked in front of the Senate building before the blue ribbon committee hearing opened at around 9:30 a.m.

A Nissan Pathfinder and a Mitsubishi L-300 van were brought in by Beltran; a Mitsubishi Strada 4X4 pick-up by Jaucian; and an Isuzu Sportivo by the staff of Archbishop Salgado, who was abroad.

Quevedo, Pueblos, Valles and Jumoad were set to return the vehicles they had been using.

Quevedo and Valles had been using a Toyota Grandia Hi-Ace van each; Pueblos a Mitsubishi Montero; and Jumoad, a Mitsubishi Strada 4X4 pickup.

While the PCSO appeared to have erred in declaring that the bishops bought Mitsubishi Pajeros, the blue ribbon committee chairman, Sen. Teofisto Guingona III, maintained that the inquiry served its purpose.

Guingona said there was no more reason to invite the bishops again to the inquiry, which resumes Thursday.

Quoting from the bishops’ opening statement, Quevedo explained that most bishops served in calamity and conflict-stricken areas, and if they lacked resources, “sought assistance from others.”

He said some of the bishops received “4×4 heavy duty pick-ups” in order to bring social and health services to remote areas, while others got “multipurpose vehicles” to bring the sick to the hospital and distribute food, medicine and clothing to calamity-stricken families.

“As our pastoral statement said, we honestly failed to consider the pitfalls to which these grants could possibly lead,” Quevedo said. “We also express our readiness to do everything necessary to heal this wound, so we can all move forward in hope.”

The vehicles in Mindanao were ready for “immediate turnover” to PCSO officials, Quevedo said.

Malacañang said it would let the PCSO decide whether it would accept the vehicles returned by the bishops.—With a report from Christine O. Avendaño