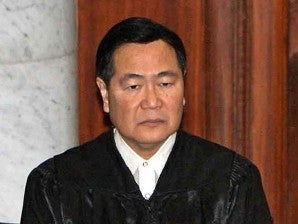 President Benigno Aquino risks demoralization in the judiciary if he breaks tradition and picks an outsider to replace ousted Chief Justice Renato Corona.

“You have impeached the Chief Justice and his person, you have not impeached the rest of the court,” acting Chief Justice Antonio Carpio told the Judicial and Bar Council (JBC) on the third day of its nationally televised hearing to recommend a successor to Corona.

The 62-year-old Carpio acknowledged Mr. Aquino’s constitutional prerogative to appoint an outsider from the short list of three candidates for Chief Justice to be submitted by the JBC on July 30.

“I will not deny that it will be bad for their morale,” Carpio warned, referring to the ranks of the judiciary and noting that the only instance an outsider was named top magistrate was during World War II when the country was occupied by the Japanese.

“The tradition encourages the incumbents in the appellate court, including the Supreme Court, to look forward to the day that they will be senior and will have the chance to be Chief Justice,” he said.

He said he did not think it was necessary to appoint an outsider to reform the judiciary and stressed that decisions are not reached in the Supreme Court as a body and only after extensive debates. “We are not a club, we have heated discussions.”

The council will interview four more nominees today, wrapping up the screening of 20 aspirants that began on Tuesday. It will submit a short list to the President on July 30.

Iloilo Representative Niel Tupas asked why Carpio remained silent on accusations by Corona that the acting Chief Justice had a hand in his removal. Carpio explained that he did not want to inhibit himself from cases in the high court involving Corona. He also said he believed the accusation would be found to be untrue.

Carpio also denied the allegation that he had schemed with President Aquino and Transportation Secretary Manuel Roxas to oust Corona, saying he never talked to them. He even said people were saying he would not get the position of Chief Justice because he was not close to the President.

Pressed by Tupas on that allegation, Carpio told the congressman: “You would know that because I never talked to you.” This drew laughter from the audience.

Corona also said that he did not think Corona’s impeachment trial was an affront to the judiciary, explaining that the Constitution gave Congress the power to impeach officials.

Carpio disagreed with the assertion by Associate Justice Roberto Abad, also a nominee, on Wednesday that Corona’s impeachment trial had left a “wounded” judiciary.

Carpio said that the impeachment was “directed at a person” and the high court members were not affected.

But he said the impeachment trial brought up problems about the judiciary, including clogged dockets and allegations of corruption.

“It has come out to the fore because of the impeachment and we have to address it because of the perception of the people,” he told Tupas, head of the House prosecution team that was repeatedly slammed during Corona’s trial for being unprepared.

The Congress representative in the JBC left the panel after his questioning of Carpio, as he did the past three days of interviews, which he did not attend in its entirety. Tupas, along with Senator Francis Escudero, is appealing the Supreme Court decision allowing only one representative from Congress in the JBC.

Asked by Tupas what he would have done if he were in the shoes of Corona and was facing removal, he said he would have allowed the impeachment process to proceed “in a dignified way.”

Tupas asked Carpio if he would have resigned to save the nation the agony of undergoing a trial. “If I misdeclared my SALN (statement of assets, liabilities and net worth) to that extent, then I would resign right away,” he said.

To the query of JBC member Jose Mejia, Carpio also said court members never discussed the impeachment of Corona when he was on trial in the division-level or when they were in en banc meetings and that he found this “weird.”

De Castro, who chairs the program’s management committee, said the total funds questioned by the bank were around $115,000, which she said was a “small percentage” of the total $21-million loan. The World Bank originally listed about $160,000 worth of “ineligible” expenditures.

She said items questioned by the bank included the payments made to an employee who lectured on docket declogging and another who talked abroad about the Supreme Court’s Justice on Wheels program and lunch for the visiting chief justice of Guam.

“They were not disallowed. There was just a problem of where to charge the amount. Those were minor expenditures. Nothing spectacular about the disturbance of those funds. And I’d like to point out ineligible does not mean irregular. It only means that it should be charged to the loan because according to them (WB), we did not secure their agreement,” she said.

“None of the justices ever touched money in that loan,” De Castro said, adding that it was the Project Management Office that was in charge of disbursing the expenses. The terms of the loan ended last month, she said.

Valdez, on the other hand, raised the issue of excessive court fees that he said was unconstitutional and deprived people of access to justice. Asked by retired Court of Appeals Justice Aurora Lagman if he would stop this, Valdez said, “We have to be reasonable, find a middle way.”

With a vast experience on agrarian reform law, the UE law dean also was asked about his stand on the issue of just compensation in the case of Hacienda Luisita, the estate owned by the family of President Aquino that the high court had ordered to be distributed to its workers.

“You have to go to the table and compute how much reward had been received (by the family) and appeal to their patriotism so farmers have this land.” But Valdez also said an inventory should be made for beneficiaries of land reform in general to see if “we are able to achieve the purposes of land reform.”

Villanueva, a former dean of the Ateneo Law School, said he wanted the Supreme Court to be primarily a constitutional court.

“It should not overburden itself with [ordinary] cases, it should concentrate on important cases,” he said. Focusing on constitutional issues, he added, would make the court a “true pillar” of democracy.

Villanueva said his judicial philosophy was that the Supreme Court “should serve the needs of the country.”

He said his top three priorities were to unite the judiciary, come up with a road map for the judiciary and ease the case loads of the judges and justices.