MANILA, Philippines—The government was again rushing to get a former president and not Pampanga representative Gloria Macapagal-Arroyo through the plunder case filed by the Ombudsman before the Sandiganbayan, Arroyo’s legal counsel said Thursday. 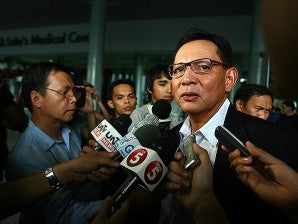 Lawyer Raul Lambino said in an interview with Radyo Inquirer 990AM early Thursday that the plunder case filed by the Ombudsman regarding alleged misuse of P366-million Philippine Charity Sweepstakes Office (PCSO) funds had not followed the correct process.

“This plunder case filed by the Ombudsman on the PCSO, [the government] did not follow the correct proccess because the preliminary investigation of the Ombudsman was not yet finished,” Lambino said.

“We have not even received a copy of the resolution of the Ombudsman so we can file a motion for reconsideration in another day. They immediately filed it before the Sandiganbayan,” he added.

Arroyo on Wednesday was granted bail by Judge Jesus Mupas of the Pasay City Regional Trial Court on the basis that there was not enough evidence in the electoral sabotage case previously filed by the Comelec-Department of Justice.

Militant groups who protested the release of Arroyo blamed the Aquino government for rushing a weak case against Arroyo just to get her arrested as soon as possible.

Lambino said they have filed a motion for deferment of judicial proceedings before the Sandiganbayan, which will be heard on Thursday, in the hope that the Sandiganbayan will return the case to the Ombudsman so preliminary investigation can be finished.