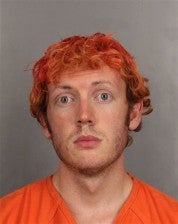 AURORA, Colorado—Alleged Colorado shooter James Holmes reportedly sent a warning package to a psychiatrist at his former university more than a week before massacring people at a cinema.

The parcel appeared to have arrived at the University of Colorado on July 12 but sat opened until after the July 20 massacre, one unnamed law enforcement source told Fox News.

The package contained a notebook full of details about his plans and several drawings, including some of gun-wielding stick figures shooting other stick figures, the report said.

“There were drawings of what he was going to do in it — drawings and illustrations of the massacre,” the law enforcement source told Fox News. Holmes, 24, is accused of shooting 12 people dead and wounding 58 more at a cinema on Friday in Aurora, outside Denver, as young moviegoers packed the first midnight screening of the latest Batman film, “The Dark Knight Rises.” It is not clear why the package was never delivered to the psychiatrist, a professor at the university where Holmes once studied for a PhD, nor whether it actually arrived in time to potentially prevent the massacre.

A second law enforcement source quoted by FoxNews.com said they were unable to confirm that the package had arrived before the killings occurred.

The spiral-bound notebook was discovered on Monday after the psychiatrist received a package he feared had come from Holmes and police searched the mailroom for suspicious packages.

The gunman emerged from a fire exit on Friday shortly after the film began and threw two canisters of noxious gas into the auditorium.

After firing one round directly into the air with a pump-action shotgun, he began shooting people at random with a military-style assault rifle capable of dispatching 50 to 60 rounds a minute, witnesses said.

The first funeral of a victim of the massacre took place on Wednesday. Gordon Cowden, 51, was the oldest person killed in the rampage. He had gone to the movie with his teenage children, who escaped unharmed.

Authorities say Holmes had painted his hair reddish orange and claimed he was the Joker, Batman’s sworn enemy in the comic book series that inspired director Christopher Nolan’s film trilogy, which features British-born actor Christian Bale as “the caped crusader”.

According to reports and at least one witness, Holmes might have killed more people had his assault rifle not jammed.

The suspect gave himself up outside the cinema, still clad in the body armor witnesses described the gunman wearing.

Police said Sunday they had found Holmes’s computer inside his booby-trapped apartment — rigged to kill anyone who entered — which could provide crucial details about how he planned and executed the attack.

He is being held in solitary confinement in the Arapahoe County Detention Center and could face the death penalty if convicted.

A report in the New York Daily News, meanwhile, made the claim that Holmes had asked a stunned jail worker to tell him how the movie ends.

“Like he had no idea why there was anything wrong with what he was saying. It was sick… I think he’s trying real hard to act crazy,” a witness to the incident was quoted as saying.

His eyes glazed and his voice flat, Holmes reportedly asked a jail worker “Did you see the movie?” and then “How does it end?”

He repeated the question when the worker ignored him.

Wearing a maroon prison jumpsuit, the graduate school dropout didn’t speak as lawyers read out a list of accusations during the short procedural hearing at Arapahoe County District Court in the town of Centennial.

Holmes, a former PhD candidate in neuroscience, appeared unable to follow proceedings as his head bobbed up and down and he alternated between staring out wild-eyed and closing his eyes shut as if in a daze.

Services are scheduled in Aurora on Thursday for 23-year-old Micayla Medek, a college student who worked at a sandwich shop and was saving money for a trip to India.

A funeral with full military honors is planned for next week in Reno, Nevada, for Jon Blunk, 26, a father of two who died in the shooting after pushing his girlfriend Jansen Young under a theater seat, saving her life.