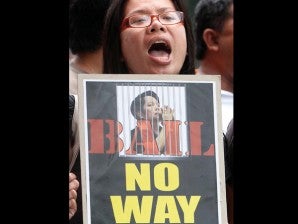 YES WAY She tried to stop former President and now Pampanga Rep. Gloria Macapagal-Arroyo on her way out of Veterans Memorial Medical Center in Quezon City but her convoy took the other way. MARIANNE BERMUDEZ

But instead of exiting through the main gate on North Avenue, her convoy passed by a smaller gate on Mindanao Avenue, away from the throng of media people, protesters and supporters who waited to see her.

What greeted them was the black vehicle of Arroyo’s lawyer Ferdinand Topacio, whose path was blocked by media people and even angry protesters who had been waiting since 11 a.m. despite the unbearable heat.

When the news broke out, more than 50 members of Bagong Alyansang Makabayan and allied groups dashed to Mindanao Avenue in a bid to catch up with the former President’s seven-vehicle convoy.

The protesters tried again to block the convoy on Mindanao Avenue but the vehicles slowly made their way through the crowd.

Sadly for news crews tailing Arroyo, guards at the posh La Vista subdivision barred them from entering the gated village.

The convoy arrived at the subdivision shortly before 3:30 p.m.

Outside the sprawling house on 14 Badjao St., the gate was seen partially open, revealing a team of around 10 police officers standing on the lawn.

Two police ambulances and a mobile patrol were parked on the street, along with the white van which brought Arroyo home.

A black SUV with an “8” plate was seen driving away from the house.

Elsewhere along the street, it seemed as if neighbors were still unaware that the congresswoman had arrived from her eight-month hospital stay at VMMC, as there were no onlookers seen peering from their gates to check what was going on.

Superintendent Michael Macapagal of the Anonas police station said the police officers assigned to the Arroyo house were from the Police Security and Protection Group.

“We are just tasked with manning the periphery of La Vista,” he told reporters outside the subdivision gates.

Upon her arrival at La Vista, Arroyo, wearing her neck brace and a scapular over her dark blouse, was seen waving to her supporters also gathered outside the subdivision.

One of her lawyers, Raul Lambino, said the former President would most likely stay the night at the exclusive subdivision to receive visitors.

“She was very happy when we learned that the bail was granted, as she is innocent of the accusations,” Lambino said.

Asked about Arroyo’s condition, VMMC director Nona Legaspi said in a text message that the former President “is OK” and that her condition had improved.

She added that Arroyo’s “medical needs once out on bail will be her (Arroyo) concern.”