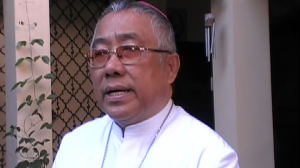 Members of the influential Catholic Bishops Conference of the Philippines (CBCP) on Tuesday denounced President Benigno Aquino’s decision to push for the passage of the reproductive health (RH) bill during his State of the Nation Address (Sona) on Monday.

Lipa Archbishop Ramon Arguelles said the President’s open endorsement of the bill during his Sona was a declaration of “open war” against the Catholic Church.

“Aquino declared an open war, a head-on collision against us and against the Catholic Church. So terrible, so blatantly Aquino missed the point,” Arguelles said in an interview.

“We in the prolife movements are so disgusted with these vigorous pronouncements in support of responsible parenthood,” he added.

Arguelles dismissed the President’s contention that slowing down the country’s population growth would benefit the nation. In contrast, the prelate said, the country’s booming population would drive its economy.

Sorsogon Bishop Arturo Bastes, member of the CBCP Permanent Council, said Mr. Aquino’s statement was a “bad omen” for the Catholic Church and was undermining its moral authority.

“Aquino is undermining the moral force of the Catholic Church. We have to move our people to vigilance and teach more our congressmen about the dangers of the RH bill,” Bastes said.

“Poverty, not population, must be eliminated. The more contented people are in the Philippines, the greater is our nation. Don’t kill people,” he added.

Voice of the people

Malolos Bishop Jose Oliveros urged President Aquino to listen to the voice of the people, whom he noted are majority Catholic.

“Aquino has credited the Filipino people as his bosses for the changes made by his administration. Now he is imposing on the Filipino people his own stand on the RH bill. He should listen to the voice of the majority of our people who are Catholics,” Oliveros said.

But deputy presidential spokesperson Abigail Valte said Mr. Aquino was pushing for the consolidated version of the population management bills pending in the House of Representatives.

“Remember that the President did submit as a priority measure in the 112th [legislative-executive development advisory council] meeting the draft bill of the administration which has been consolidated with the six pending bills in Congress,” Valte told a news briefing in Malacañang.

Despite the President’s endorsement of the RH bill, the Senate leadership is in no hurry to pass the controversial bill.

Senate President Juan Ponce Enrile described the President’s statement as a “desire,” while Majority Leader Vicente Sotto III said it was a “very wise move” but intended more as a piece of “advice.”

“No pressure. The President knows that all legislation is open to debate,” Enrile told reporters.

“That is a statement of his desire and to the extent that we can accommodate it, we will accommodate it. But if not, then we say, ‘we beg your pardon.”

Sotto said the Senate was under no pressure to pass the RH bill simply because the President advocated responsible parenthood in his Sona.

“Everybody is in favor of responsible parenthood … that’s why the proposal of the President is good,” he said.

Senator Pia Cayetano, a cosponsor of the RH bill, said she was “not surprised” that Enrile and Sotto were not feeling any pressure.

“They don’t want it anyway,” she said. “I will pressure them simply by doing what is my job, which is to make sure that the bill will go through the process.” With Norman Bordadora and Christian V. Esguerra