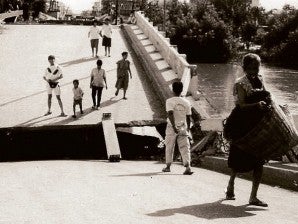 MAGSAYSAY Bridge, one of Dagupan City’s two bridges that span the Pantal River, collapsed after the 7.7-magnitude earthquake on July 16, 1990. PHOTO COURTESY OF THE DAGUPAN CITY INFORMATION OFFICE

Twenty-two years after a 7.7-magnitude earthquake shook the coastal city of Dagupan in Pangasinan, Mayor Benjamin Lim still vividly remembers the ensuing panic and chaos that almost turned the place into a ghost town.

“It was a nightmarish scene. All of a sudden, you see the entire city under water, full of soil. Buildings sank, some of them tilted. We can’t use the roads and there was no power supply,” Lim says.

One of the two bridges spanning the Pantal River collapsed and the market building crashed.

“I saw people being pulled out from one of the movie houses. I think there were about seven bodies,” Lim says.

The earthquake, which struck at 4:26 p.m. on July 16, 1990, triggered liquefaction, a phenomenon where loosely packed, underground watery sediments spurted like geysers after an intense shaking.

“There was practically no government at that time because we were not prepared for it,” Lim says.

Today, Dagupan has risen from the tragedy, slowly but steadily growing in the past two decades to become one of the major commercial hubs in the Ilocos region.

But taking Dagupan to where it is today has not been easy, especially in the first few days after the disaster, as aftershocks still rocked buildings and houses.

“At that time, experts were saying Dagupan was no longer livable and every one should leave … they believed that the city could no longer be rebuilt,” Lim says. “It was difficult to convince people [not to leave] because there was no water, no electricity, no transport means.”

In fact, he says, many of the business owners had moved to the neighboring towns of Mangaldan and Calasiao.

“Some of them transferred their children [to schools] in Metro Manila. It was a doomsday scenario everyday. And it also took awhile for the national government to react because there were other affected areas, like Baguio and Cabanatuan cities,” Lim says.

To stop an emerging exodus to other places, Lim gathered a group of business owners and civic organization leaders, and formed the nongovernment Economic Reconstruction Group (ERG). It was also the ERG that convinced then Mayor Liberato Reyna Sr. to put up a temporary public market at the plaza.

At that time, Reyna received a P5-million grant from the national government for the rehabilitation of the heavily damaged water system. “Instead of [spending the money for] the water system, I convinced him to use the money in building a temporary market at the plaza,” Lim says.

“For people to stay, they should not be made to panic for not being able to buy goods from all the stores that were closed then. So, we should have a market,” he says.

In the months that followed, the ERG attended meetings with local and national government agencies involved in the rebuilding process.

“We met with experts on engineering. We met with financing institutions, like Land Bank of the Philippines. We also met with national government officials, including then President [Corazon] Aquino,” Lim says.

“We negotiated with then [Pangasinan] Rep. Jose de Venecia Jr. to … [address] the priority needs of the city. We also coordinated with the provincial government, although we are a city independent from the province. At that time, we had very good relationship with then Gov. [Rafael] Colet, who was also helpful in trying to patch us up with the different national organizations,” he says.

With the people determined to stay, Dagupan was rebuilt, propped up by a P10-billion earthquake rehabilitation fund that Congress had appropriated, Lim says. “In two years, we were able to put back Dagupan, just as I had guessed it,” he says.

The main roads, which had huge cracks filled with sand and mud due to liquefaction, were rebuilt, enabling vehicles to enter the city again. The felled bridge was put up, bringing back business.

“I think as a people, we now feel that after any calamity, any problem could surface, but there’s always hope for a better tomorrow,” Lim says. “It cannot be said that just because something terrible happened, we must stop. No, we have to continue struggling.”