Gun culture thrives despite US massacre 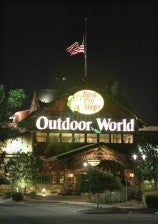 The Bass Pro Shops store in Denver, Colo. is shown, Saturday, July 21, 2012. The store is where the gunman in Friday’s movie theater shooting in Aurora, Colo., allegedly purchased two of his weapons. (AP Photo/Ted S. Warren)

AURORA, Colorado—A girl aged five or six tries out a rifle in an Aurora gunshop, oblivious to Friday’s massacre in this Colorado town. “Honey, it’s too big for you, we will find you another,” says her mother.

This is a normal scene in the US heartland where it takes more than a few mass shootings to drive a wedge between patriotic Americans and their right to bear arms, as enshrined in the Second Amendment of the Constitution.

One argument brandished by diehard supporters of gun rights is that if the citizenry is armed, crazed gunmen like alleged Aurora shooter James Holmes will be taken down before they claim so many lives.

“If I were there, I would have killed him,” and “Guns don’t kill people, people do,” are popular refrains.

Speaking after a gunman, presumed to be Holmes, shot dead 12 people and wounded 58 others in a packed Aurora cinema, John Oberly, a 51-year-old rugby coach, told AFP it was not the right to bear arms that created the problem.

President Barack Obama’s Republican challenger in November elections, Mitt Romney, reiterated his strong support for the Second Amendment as he stressed on Monday that now was not the time to work on new gun legislation.

“With emotions so high right now, this is really not a time to be talking about the politics associated with what happened in Aurora,” he said.

Calls for a re-examination of America’s gun laws mounted in the aftermath of the tragedy as it emerged that Holmes bought his four weapons legally.

Holmes, a 24-year-old graduate student, also bought a special magazine for his AR-15 military-style assault rifle that enabled him to fire up to 50 to 60 rounds per minute.

Romney said gun laws were tough enough and not the problem.

“I still believe that the Second Amendment is the right course to preserve and defend and don’t believe that new laws are going to make a difference in this type of tragedy,” he said.

“There were, of course very stringent laws which existed in Aurora, Colorado. Our challenge is not the laws, our challenge is people who, obviously, are distracted from reality and do unthinkable, unimaginable, inexplicable things.”

Oberly perused the ammunition shelves at one of several of Aurora’s gun stores.

Dedicated to serving hunters, the shop sports stuffed animals, including a lion, a buffalo and a bear, and offers clients ammunition, rifles, pistols, clothing and camping gear.

Buying weapons “is fairly easy, if you are not a criminal,” he said. “It’s a simple piece of paperwork. They do an instant check and you walk out from the store. Or you can have it mailed to your house.”

Indeed, an AFP reporter found out that she needed only a driver’s license. With it, the seller checks the criminal record of the purchaser and, if there are no crimes, the sale is executed in one minute.

That’s why Holmes was able to assemble his arsenal: he had no criminal record aside from a speeding ticket.

Advocates of stricter gun control measures argue that America is more prone to these kinds of mass shootings than other countries because the law in many states is far too lenient.

They have been disappointed by Democratic President Barack Obama, but political pragmatists see that he could be committing electoral suicide if he took up such an explosive issue at the current time.

Several key battlegrounds in November’s elections—Ohio, Pennsylvania and Virginia, for example—have gun-friendly populations that remain wedded to their right to bear arms.