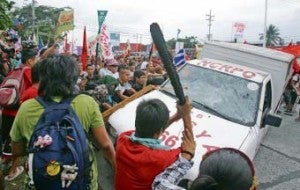 It was a familiar sight this time of year: Students and farmers burning effigies of President Benigno Aquino and Uncle Sam. But they were stopped by police from getting close to the Batasang Pambansa complex to denounce the government’s alleged failure to improve the plight of workers, triggering a brief melee that left scores injured.

Fire trucks, steel barricades and a 6,000-strong police force blocked the protesters led by the leftist group Bagong Alyansang Makabayan (Bayan) on Commonwealth Avenue in front of Ever Gotesco mall about 2 kilometers from the Congress building, where the President delivered his annual State of the Nation Address (Sona).

A brief scuffle ensued when a group led by the militant League of Filipino Students attempted to breach the police line after the effigies were burned.

In the middle of it all, around 10 gays stole the show, providing a respite from the street tension.

Wearing colorful headgear and banners, they paraded in front of the phalanx of policemen and protesters chanting slogans calling on Mr. Aquino to push for the human rights of lesbians, gays, bisexuals and transsexuals.

“All public assemblies and mass activities held today in different parts of Metro Manila and some key cities of the country were generally peaceful,” Director General Nicanor Bartolome of the Philippine National Police said in a statement shortly after the President ended his speech at 5:30 p.m.

Protesters on Commonwealth Avenue denounced the police for stopping them at around noon—four hours before Mr. Aquino delivered his Sona.

Edre Olalia of the National Union of Peoples’ Lawyers said Bayan filed an application for a rally permit on July 10.

He said the Public Assembly Act mandated the city government to act on rally applications within two days after which the authorization is deemed granted.

“As far as we are concerned, our protest is legal, by operation of law. And you are violating the law,” Olalia told police officers.

Superintendent Marcelino Pedrozo, the ground commander, and Supt. Nicanor Salamera, a human rights monitor, said they did not receive any approved rally permit from the City Hall. “We are allowing them to hold their rally here out of consideration,” Pedrozo said.

Up to 3,000 protesters joined rallies in the provinces of Iloilo, Capiz and Aklan to voice out their own versions of the Sona.

“We have become poorer because the prices of commodities continue to increase. Many remain landless and have no jobs, especially those in hinterland villages,” said Aileen Catamin, a former village captain who joined a protest of indigenous peoples in Capiz.

In Bacolod City, about 500 Bayan militants burned an effigy of an eagle, representing the United States, and an octopus to symbolize the various social ills besetting the nation.

“It’s no fun in the Philippines when it comes to the urban poor situation,” said Irineo Longinos, Kadamay-Negros spokesperson.

Around 100 members of Sanlakas, Freedom from Debt Coalition, and Bukluran ng mga Manggawang Pilipino marched from Colon Street to Fuente Osmeña Circle in Cebu City at around 10 a.m. They brought with them camote and dried fish, which they ate after their short program at noontime.

Bayan-Negros secretary general Christian Tuayon rated the President’s performance on leading the country and implementing economic and political programs at one, on a scale of one to 10.

Sanlakas and the two other groups in Cebu gave the President a grade of 70.76 in several aspects—the right to work, food, housing, health and education.