Aquino: Nothing is impossible

The Philippines has achieved change, and the Filipinos themselves have made it happen.

President Benigno Aquino faced a joint session of Congress Monday to deliver his third State of the Nation Address (Sona). He did not claim credit for the improvements in national life in the past year. All credit he gave to the Filipinos. He thanked them for the achievements.

He said that in the 25 months that he has been President, he learned that “nothing is impossible because if the Filipino people see that they are the only Bosses of their government, they will carry, they will guide you, they themselves will lead you to meaningful change.”

“Nothing is impossible to a united nation,” Mr. Aquino said. “It was change we dreamed of, and change we achieved.”

Toward the end of his one-hour-and-a-half-long speech, he said: “Isn’t it a great time to be Filipino?”

And the benefits of change, he said, are now par for the course: Roads are straight and level, and properly paved; relief goods are ready even before a storm arrives, rescue services are always on standby, and people are no longer left to fend for themselves; sirens only blare from police cars, ambulances, and fire trucks—not from the vehicles of government officials.

“Reforms were established as we cut wasteful spending, held offenders accountable for their actions, and showed the world that the Philippines is now open for business under new management,” the President said.

He reported eight credit rating upgrades, 44 stock market record highs, and a first-quarter 2012 gross domestic product growth rate of 6.4 percent, “much higher than projected, the highest growth in the Southeast Asian region, and second only to China in the whole of Asia.”

• The conditional cash transfer program for the poorest poor has been extended to 3.1 million households as of February from 760,357 when he took office in June 2010.

For next year, the program will cover 3.8 million households, five times bigger than the program he inherited from the Arroyo administration.

Under the program, the beneficiaries get P1,400 a month on the condition that pregnant women get regular prenatal checkups, mothers bring their children to clinics for immunization and parents keep their children 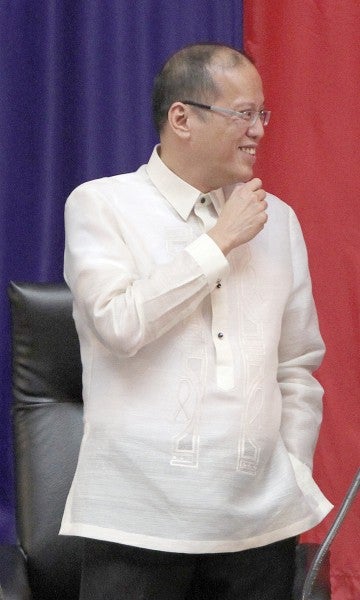 TO MY BOSSES: “This is not my SONA. This is the SONA of the Filipino nation. You are the wellspring of change. It’s possible. It is a great time to be Filipino.”

According to the Department of Social Welfare and Development, the President said, 1,672,977 mothers are now getting regular checkups; 1,672, 814 children have been vaccinated against diarrhea, polio, measles and other diseases; and 4.57 million children no longer miss classes because of poverty.

• Eighty-five percent of all Filipinos have been enrolled in PhilHealth, compared to 62 percent in 2010. This means 23.31 percent more Filipinos have gained access to health insurance in the past two years.

Better news: 5.2 million poorest households will benefit from PhilHealth programs, including treatment for such diseases as breast cancer, prostate cancer and acute leukemia.

“The process,” Mr. Aquino said, “is this: Go to any government hospital, show your PhilHealth card, get treatment, and you will go home without shelling out a single centavo.”

“We are ending the backlogs in the education sector, but the potential for shortages remains as our student population continues to increase,” Mr. Aquino said. Then he suggested a solution: “Perhaps the responsible parenthood bill can help address this.”

That drew the loudest of the 100 bursts of applause that interrupted Mr. Aquino’s speech.

• A proposed 43.61-percent increase in the budget of state universities and colleges next year.

• The completion by 2016 of airports in Panglao, Bohol; Daraga, Albay; Laguindingan, Misamis Oriental; and the upgrading of the international airports in Mactan, Cebu; Tacloban, Leyte; and Puerto Princesa, Palawan.

• Full repair of the flaws of Terminal 3 of the Ninoy Aquino International Airport before the next Sona in July next year.

• Completion by 2015 of the extension of the Light Rail Transit Line 1 to Cavite, which would ease traffic in Las Piñas, Parañaque and Cavite, and the addition of two elevated expressways that will connect the North Luzon and South Luzon expressways, and reduce travel time between Clark in Pampanga and Calamba in Laguna to 1 hour and 40 minutes.

• Drawing 2.1 million tourists in the past two years, compared to 1.3 million during the nine years of the Arroyo administration. The goal for this year: 4.6 million tourists.

• Reduction of rice imports from 1.3 million metric tons in 2010 to 500,000 metric tons this year. Weather permitting, the Philippines may start exporting rice next year.

Turning to national defense, the President said the government allocated P28 billion for the modernization of the military. “This will soon match the P33 billion set aside for the program in the past 15 years,” Mr. Aquino said.

That’s only getting started, he said. If the proposed military modernization bill is passed by Congress, P75 billion will be allocated for defense in the next five years.

Saying the country cannot just give its territory away, Mr. Aquino called on the nation to unite behind his government’s efforts to resolve the Philippines’ dispute with China over Panatag Shoal in the West Philippine Sea.

“If someone enters your yard and tells you he owns it, will you allow that?” he said. “It’s not right to give away what is rightfully ours. And so I ask for solidarity from our people regarding this issue. Let us speak with one voice.”

He assured the nation: “We are consulting experts, every leader of our nation, our allies—even those on the other side—to find a solution that is acceptable to all.”

Mr. Aquino also asked Congress to pass crucial legislation, including the sin tax reform bill, the third amendment to the Anti-Money Laundering Act that would increase the number of predicate crimes covered by the law, his administration’s version of the military modernization bill, the responsible parenthood bill, and the amendment to the mining law that would increase the government’s share in mining revenues.

“Let me remind you that our fight does not end with the ousting of one corrupt official, with the suspension of an anomalous contract, or the systemic overhauling of a government office,” Mr. Aquino said, referring to former Chief Justice Renato Corona, for whose removal from office in May he thanked his allies in Congress and Ombudsman Conchita Carpio Morales.

“I call upon Congress to pass our amendments to the Anti-Money Laundering Act, which may strengthen our measures to hold the corrupt accountable,” Mr. Aquino said.

Referring to his Executive Order No. 79 that outlined his administration’s mining policy, Mr. Aquino said: “Think about it. In 2010, P145 billion was the total value derived from mining, but only P13.4 billion, or 9 percent, went to the national treasury.”

But the natural resources belong to the Filipinos, he said. “It shouldn’t happen that all that’s left to you is a tip after they’re extracted. We are hoping that Congress will work with us and pass a law that will ensure that the environment is cared for, and that the public and private sectors will receive just benefits from this industry.”

Mr. Aquino appealed to the nation for support for his administration in next year’s midterm elections so that changes may continue.

“Elections are fast approaching,” he said. “You, our bosses, will be our compass. I ask you, ‘Boss, what direction will we take? Do we continue treading the straight and righteous path, or do we double back toward the crooked road that leads to a dead end?’”

He reminded the nation of the irregularities in the Arroyo administration without, however, mentioning the ex-President’s name, and said that there were still people who were committed to bring that system back.

“These are also the ones who say, ‘Let go of the past. Unite. Forgive and forget so we can move forward as a people,’” Mr. Aquino said.

“I find this unacceptable. Shall we simply forgive and forget the 10 years that were taken from us?” Mr. Aquino said.

Arroyo, now a Pampanga representative, is detained in a government hospital, facing criminal charges for alleged electoral sabotage, breach of ethics involving an overpriced broadband Internet deal with a Chinese company and the plunder of millions of pesos in Philippine Charity Sweepstakes Office funds.

Mr. Aquino thanked his officials for dedicated service that enabled him to advance his programs and deliver on his promises to the people.

But most of all, he thanked the Filipinos for their cooperation and support.

“This is my third Sona; only three remain,” Mr. Aquino said. “We are entering the midpoint of our administration. Last year, I challenged you to fully turn your back on the culture of negativism; to take every chance to uplift your fellow Filipinos. From what we are experiencing today, it is clear: You succeeded.”

He said that whenever people came to him to thank him for the change in their lives, his response was: “You made this happen.”

And he concluded his speech: “I stand before you today and tell you: this is not my Sona. You made this happen. This is the Sona of the Filipino nation. Thank you.”