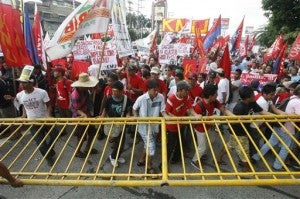 Protesters remove the barricade put up by riot police as they attempt to march closer to the Philippine Congress to protest the third State of the Nation Address of Philippine President Benigno Aquino III Monday, July 23, 2012 in Quezon city, northeast of Manila. AP PHOTO/BULLIT MARQUEZ

MANILA, Philippines—The clash between police and militants shortly before President Benigno Aquino delivered his State of the Nation Address on Monday afternoon was a result of the “frustration of the protesters with the illegal imposition and curtailment of their rights by the police.”

“The blockade to begin with was against the law. The groups that marched on the opposite lane apparently wanted to challenge the illegal blockade,” Reyes said.

Reyes claimed that at least 95 of them were injured, mostly head traumas and defensive wounds. Eleven were hospitalized for injuries and were taken to the East Avenue Medical Center. Police said, that more than 10 within their ranks had minor injuries as a result of their effort to block the protesters.

Meanwhile, two media members were injured, it was learned.

Militants tried to destroy the steel barriers dividing the eastbound and westbound lanes, and threw stones and other objects at policemen who tried to block them.