AFP to get more equipment, aircraft next year – Aquino 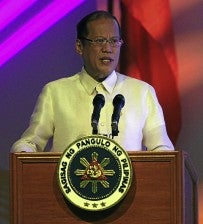 In his third state of the nation address at the House of Representatives, Aquino said that by the end of the year, the Armed Forces will receive 21 refurbished UH-1H helicopters, four combat utility helicopters, radio and other communication equipment, rifles, mortars, mobile diagnostic laboratories and station bullet assemble.

He added that by January 2013, BRP Ramon Alcaraz– the country’s second Hamilton Class cutter– will arrive in the Philippines.

(We are not sending paper boats out to sea. Now, our 36,000 kilometers of coastline will be patrolled by more modern ships.)

The BRP Ramon Alcaraz is a 45-year old vessel retired from service by the United States Coast Guard.

(This is in addition to their assistance in improving the way we patrol our shores under the Coast Watch Center of the Philippines, which will soon be established.)