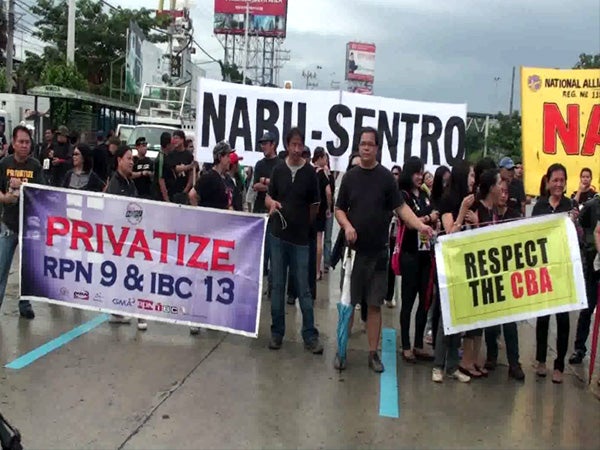 MEDIA PROTEST. The National Alliance of Broadcast Unions Federation joined militant groups in a protest as they call for the full privatization of government television networks IBC 13 and RPN-9 near Batasang Pambansa, Monday, hours before President Aquino delivers his third Sona. Photo by Noy Morcoso, INQUIRER.net

The National Alliance of Broadcast Unions (Nabu) joined militant groups in an early protest near Batasang Pambansa, calling for the full privatization of government-owned television networks IBC 13 and RPN 9.

“We are asking His Excellency President Noynoy Aquino to help facilitate immediately the full privatization of IBC 13 and RPN 9, at the same time involving the unions and workers in the privatization process, and ensuring their rights and claims under their corresponding collective bargaining agreement,” said Nabu president Hilario Simacon.

The group is also asking the President to help facilitate the budget release for the government television station NBN 4 and for release of workers’ benefits.

Limacon said they were in support of the filing for notice of strike at National Conciliation and Mediation Board of the Department of Labor and Employment by RPN 9.

The unions filed previously on February 21 and July 15.

“An estimated P100 million of accumulated CBA unpaid benefits remains unpaid to the current RPN employees. Another estimated P300 milliom of separation pay have yet to be paid to the already retired/resigned RPN 9 employees, many of whom afflicted with ailments that entails medical expenses and some had since died,” said Ramon Tomale, President of RPN Directors/Supervisors Union.

At the start of the Aquino administration in 2010, Malacañang had announced the privatization of IBC 13 and RNP 9, a process that would have to be finished in 2012.