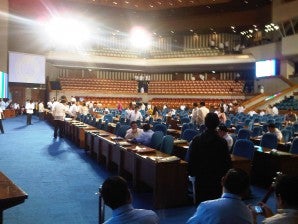 HOUSE ON A HUSTLE. A few minutes before the joint session of the 15th Congress opened, members of the House of Representatives are seen doing last-minute discussions with their colleagues before finding their seats. Photo by Karen Boncocan, INQUIRER. net

MANILA, Philippines—The joint session of the 15th Congress has been opened Monday morning, prior to President Benigno Aquino III’s third State of the Nation Address, which he will deliver in the afternoon.

Both leaders of the two chambers of Congress, Speaker Feliciano Belmonte Jr. and Senator Juan Ponce Enrile, convened their members and started the third regular session at 10 a.m.

Belmonte said that they were resuming work with “renewed vigor and a sense of urgency… to propel our country to higher growth.”

He added that the second regular session was closed “on a high note” having enacted various important bills.

Former President and now Pampanga Representative Gloria Macapagal-Arroyo was unable to attend the opening of the third regular session.

She attended the opening of the second regular session but has been a no-show at Aquino’s first and second SONAs.

She has been under hospital arrest at the Veterans Memorial Medical Center since last year for charges of electoral sabotage.