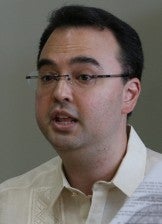 Elections Commissioner Rene Sarmiento on Sunday said he had nothing to do with alleged fraud committed during the 2007 polls in Mindanao but instead pushed for its investigation.

In a statement, Sarmiento also described as “not true” Senator Alan Peter Cayetano’s allegations that he (Sarmiento) and other members of the Commission on Elections (Comelec) did nothing to prevent cheating in the 2007 polls and acted too slowly in disqualifying a namesake, Joselito Pepito Cayetano, for being a nuisance candidate.

Sarmiento said that if the senator really had no confidence in him, then Cayetano should have advised his wife—Taguig City Mayor Laarni Cayetano, who is facing an election protest case filed by losing candidate Dante Tiñga—against pushing for the transfer of the case from the Comelec’s Second Division to the First, which Sarmiento currently heads.

“This is a testament that Cayetano believes in [my] competence, integrity, probity and independence in handling an election protest case,” the commissioner said.

Sarmiento said that in 2007 he was not a member of the First Division which disqualified Joselito Cayetano from running around the end of March or beginning of April, well ahead of the May elections.

The division had cited Joselito’s lack of financial capacity to mount a campaign and the fact that his own party, Kilusang Bagong Lipunan, had disowned him.

Sarmiento said Joselito “timely filed” a motion for reconsideration before the Comelec en banc, which affirmed the division’s ruling on May 11 or three days before election day. Joselito then elevated the case to the Supreme Court.

“As a rule, absent a final decision from the Supreme Court, the commission could not just delete the name of Joselito from the official list of candidates,” Sarmiento explained. The Supreme Court eventually dismissed Joselito’s petition.

He said no less than the opposition’s lead counsels, Sixto Brillantes, now the Comelec chairman, and Leila de Lima, now the justice secretary, “affirmed on several occasions that [I had] nothing to do with the alleged electoral fraud in Mindanao.”

Sarmiento said he was made a “last minute” commissioner in charge of the ARMM and there were no complaints about his stint.

But during the counting of votes in one ARMM province, Maguindanao, the election returns were lost by then provincial election supervisor Lintang Bedol.

Sarmiento, citing personal reasons, declined to be part of a task force led by then Comelec Chair Benjamin Abalos which traveled to General Santos City to validate duplicates of the missing returns from the municipal election officers.

Bedol and other election officers admitted last year that the 2007 polls in Maguindanao were rigged.

Sarmiento said he pushed for an investigation when he approved the formation of a Department of Justice-Comelec panel and later backed its recommendation to indict former President Gloria Macapagal-Arroyo, former Maguindanao Governor Andal Ampatuan Sr., Abalos and Bedol on electoral sabotage charges.