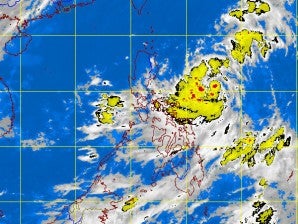 Protesters out in the streets for President Benigno Aquino’s State of the Nation Address (Sona) Monday are likely to get drenched.

Although Tropical Depression “Ferdie” has left the country, the Philippine Atmospheric, Geophysical and Astronomical Services Administration (Pagasa) on Sunday warned of occasional moderate to heavy rains on the western seaboard, including Metro Manila.

The protesters were advised to bring raincoats and umbrellas as downpours were expected in various parts of the metropolis Monday.

“We’ll be marching, rain or shine. The issues of human rights, economic degradation, sovereignty and accountability need to be heard. The true state of the nation needs to be exposed. The workers, farmers, urban poor, women and youth will make sure of that,” said Renato Reyes, secretary general of Bagong Alyansang Makabayan (Bayan).

The protesters will march from different points in Quezon City to Commonwealth Avenue. So far, the Quezon City government has not given the group permission to hold their protest in the city.

“As of Friday, we have received no word, no official communication whatsoever,” Reyes said.

According to Bayan’s counsels in the National Union of People’s Lawyers, the failure of the city government to act on Bayan’s application for a rally permit within the required period meant that the application was deemed approved.

In Pampanga, police and military rescue teams scoured the downstream sections of the Pampanga River in San Simon town yesterday to search for the body of Noel Tuazon, who drowned on Saturday afternoon.

Benjamin Santos, chief of the Municipal Disaster Risk Reduction and Management Council, said Tuazon, 15, and his classmates were traveling from Barangay (village) San Nicolas to San Pedro High School to practice for a dance number, but he dived into the water as their boat was nearing the riverbank.

The Office of Civil Defense (OCD) in Central Luzon said Bustos Dam in Bulacan released a minimal volume of water, which did not cause flooding in nearby areas.

In Pangasinan, authorities on Sunday postponed search operations for four Bolinao fishermen who were reported missing on Friday because of bad weather.

The OCD in Ilocos had asked the Philippine Coast Guard to deploy helicopters but heavy rains made flights impossible, said Ronald Talagtag of the OCD regional operations center.

“No chopper would be coming from Metro Manila, which is experiencing heavy rains. We could not also use rescue boats because of strong waves,” he said. With reports from Tonette Orejas, Inquirer Central Luzon; and Yolanda Sotelo, Inquirer Northern Luzon