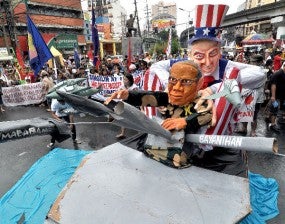 WARM-UP PROTEST Militants parade effigies of President Aquino and Uncle Sam during a Sunday rally near Malacañang in preparation for a big one when the country’s highest official delivers his third State of the Nation Address Monday at the Batasang Pambansa Complex in Quezon City. RICHARD A. REYES

It’s a speech that will show that “what President Aquino says is what he does.”

This is how the Palace describes the third State of the Nation Address (Sona) that President Aquino will deliver before a joint session of Congress Monday.

Careful not to give away how the speech would go, presidential spokesperson Edwin Lacierda on Sunday gave assurance that it would be “truthful and inspiring,” not at all the speech that Mr. Aquino’s critics had judged even before hearing it as a rehash of old issues and promises.

In time for the President’s third report to Congress, experts in different fields who make up the Movement for Good Governance (MGG) released their new scorecard for Mr. Aquino.

For his work in his second year in office, the Movement for Good Governance gave Mr. Aquino a score of 5.59 out of a possible 10. The group gave him 4.69 last year.

The movement, headed by University of the Philippines professor emeritus Solita Monsod, the socioeconomic planning secretary to Mr. Aquino’s mother, said the score, though representing an improvement from last year’s, meant that the President fell short of meeting the goals that he himself had set and committed to deliver at the beginning of his term.

Speaking on state-run radio dzRB, Lacierda said the President, after seven drafts, finished writing his speech on Saturday. Mr. Aquino, he said, was “good to go.”

Mr. Aquino faces the Filipinos’ representatives in the legislature with a higher grade given by reform-minded organizations, business leaders and ordinary citizens who have been following his performance since he set out two years ago to continue the reforms introduced by his mother, President Corazon Aquino, to pull the Philippines out of the economic wasteland she inherited from the dictator Ferdinand Marcos.

At his inauguration on June 30, 2010, Mr. Aquino said the people were his “boss,” and promised to do what they wanted him to do for them.

He also promised to lead them down the “straight path,” and proceeded to clean up the bureaucracy to make doing business with the government easier for the public, but most especially for investors who trusted that he would not taint his late mother’s legacy.

Two years later, he has raised the Philippine economy’s credit-worthiness to just one notch below investment grade and he has brought criminal charges against his predecessor, Gloria Macapagal-Arroyo, whose administration was seen as more corrupt than the Marcos regime.

And he has removed from office by impeachment Renato Corona, the Chief Justice whom Arroyo appointed as her scandal-wracked administration was ending.

The scorecard of the Movement for Good Governance showed across-the-board improvement in Mr. Aquino’s performance on the economy, public finance, government, health, environment and education.

“We commend the successes of the government in employment generation, in controlling inflation, in instituting transparency led by the [Department of Budget and Management] and [the Department of the Interior and Local Government], the provision of assistance to local governments based on performance, the decline in infant mortality, the greening program, and consultative processes in budgeting and in formulating the mining policy,” the coalition said.

But it pointed to continuing challenges in poverty reduction, provision of infrastructure, increasing global competitiveness, expanding the coverage of Philippine Health Insurance Corp., greater protection to mothers, broader and deeper access of the poor to health care, environmental protection, development of safer sources of energy, and population management through responsible parenthood.

In his speech Monday, Mr. Aquino will lay out what he has accomplished in the past year and what lies ahead, Lacierda said.

He declined to say more about the speech, only allowing that it would contain “truthful facts” and figures.

“It’s a speech that is true and significant, and it’s a speech [that] will reflect his personality,” Lacierda said. “What he says is what he does.”

He said the speech was an “edifying” report on the state of the nation “for all of us.”

Reacting to the call of Cebu Archbishop Jose Palma, president of the Catholic Bishops’ Conference of the Philippines (CBCP), for the President to give the people the real score about the country rather than just report his accomplishments, Lacierda asked whether the prelate was saying there was a “dichotomy” between truth and accomplishments.

He said the President’s speech contained “statistics” Palma would “be hard pressed to disagree” with.

The President’s policy is always to “come out with truthful facts and figures,” Lacierda said. “And that’s the reason why I am at a loss at how Bishop Palma can say that (the speech) will be only on the truth instead of accomplishments,” he added.

Part of the Sona will “delineate and discuss what the President had done during the past year,” Lacierda said.

He added that the government had been at the receiving end of good news lately, apparently referring to positive developments in the economy.

On Senator Joker Arroyo’s appeal that the President not mention the impeachment of Corona in his speech, Lacierda called on the senior lawmaker to just listen to the speech Monday.