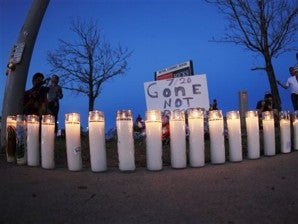 As night falls, candles sit illuminated along the sidewalk in front of a makeshift memorial for the victims of a mass shooting at the Century 16 theatre east of the Aurora Mall in Aurora, Colo., on Friday, July 20, 2012. Authorities report that 12 died and more than three dozen people were shot during an assault at the theatre during a midnight premiere of “The Dark Knight.” AP/David Zalubowski

AURORA, Colorado — The Colorado shooting suspect planned the rampage that killed 12 people and injured dozens of others at a suburban movie theater with “calculation and deliberation,” police said Saturday, receiving months of deliveries in advance that authorities believe armed him for battle and were used to rig his apartment with deadly explosives.

“You think we’re angry? We sure as hell are angry,” Aurora Police Chief Dan Oates said.

Authorities on Saturday were still working to clear dangerous explosive materials from inside James Holmes’ suburban Denver apartment, which was booby trapped to kill “whoever entered it,” Oates said, noting it would have likely been one of his officers.

Federal authorities detonated one small explosive and disarmed another inside Holmes’ apartment with a “water shot” device that emits a shock wave and water, a law enforcement official told The Associated Press. The official spoke on condition of anonymity, citing the ongoing investigation into the shooting rampage that killed 12 people and wounded 58.

Holmes’ apartment appears to have three types of explosives — jars filled with accelerants, chemicals that would explode when mixed together and more than 30 “improvised grenades,” the official said.

Oates said Holmes has been preparing the attack for months.

“We’ve become aware that he had a high volume of deliveries to both his work and home address. We think this explains how he got his hands on the magazine, ammunition,” he said. “We also think it begins to explain how he got the materials he had in his apartment.

“What we’re seeing here is evidence of some calculation and deliberation,” Oates added, apparently trying to head off a mental incompetence defense.

FBI Special agent James Yacone said that while most of the explosives had been rendered safe in Holmes’ apartment, “the threat has not been completely eliminated.”

“It was an extremely dangerous environment,” Yacone said.

Makeshift memorials sprang up for the victims, including a 6-year-old girl, an aspiring female sportscaster and a man celebrating his 27th birthday, after police grimly went door to door with a list of those killed in the worst mass shooting in recent U.S. history. Holmes, 24, was arrested early Friday outside the Aurora theater after witnesses say he unleashed gunfire and gas canisters on a crowd of moviegoers watching the midnight showing of the new Batman film, “The Dark Knight Rises.”

Federal officials said in a bulletin obtained by The Associated Press that they still hadn’t determined a motive for the suspect as families grieved and others waited at hospitals, where seven of the wounded remained in critical condition on Saturday.

In his Saturday radio address, President Barack Obama urged Americans to pray “for the victims of this terrible tragedy, for the people who knew them and loved them, for those who are still struggling to recover.”

Details of the dead began to emerge Saturday, including the youngest victim, 6-year-old Veronica Moser. Veronica had gone to the movies with her mother, who was drifting in and out of consciousness in a hospital intensive care unit, bullets lodged in her throat and abdomen.

“Nobody can tell her about it,” Annie Dalton said of her niece, Ashley Moser. “She is in critical condition, but all she’s asking about is her daughter.”

“She was excited about life as she should be. She’s a 6-year-old girl,” she said.

Another victim, 27-year-old Matt McQuinn, was killed after diving in front of his girlfriend and her older brother to shield them from the gunfire, said his family’s attorney, Rob Scott of Dayton, Ohio.

Alex Sullivan had planned a weekend of fun, to ring in his 27th birthday with friends at the special midnight showing of “The Dark Knight Rises” and then celebrate his first wedding anniversary on Sunday.

Late Friday, Sullivan’s family confirmed that police told them he was among those killed.

“He was a very, very good young man,” said Sullivan’s uncle, Joe Loewenguth. “He always had a smile, always made you laugh. He had a little bit of comic in him.”

Oates said Holmes used a military-style semi-automatic rifle, a shotgun and a pistol to open fire on the unsuspecting theater-goers. He had bought the weapons at local gun stores within the last two months. He also recently purchased 6,000 rounds of ammunition over the Internet, the chief said.

The suspect’s stellar academic record, apparent shy demeanor and lack of a criminal background made the attack even more difficult to fathom.

It also wasn’t known why the suspect chose a movie theater to stage the assault, or whether he intended some twisted, symbolic link to the film’s violent scenes.

The Batman movie, the last in the trilogy starring Christian Bale, opened worldwide Friday with midnight showings in the U.S. The plot has the villain Bane facing Bale’s Caped Crusader with a nuclear weapon that could destroy all of fictional Gotham.

The Dark Knight Rises” earned $30.6 million in Friday morning midnight screenings, and, according to industry estimates, roughly $75-$77 million on the day. That put it on track for a weekend total of around $165 million, which would be the second highest opening weekend ever, following “The Avengers.”

Warner Bros. has announced it would forgo the usual revenue reports until Monday out of respect for the victims. Other major studios also said they would delay reporting box office receipts until Monday, a day later than the routine Sunday releases for Hollywood.

Holmes had his hair painted red and “he said he was the Joker, obviously the enemy of Batman,” New York Police Commissioner Ray Kelly said on Friday. Oates would not confirm that information, although he said he had spoken to Kelly.

Near the entrance to the theater’s parking lot, a makeshift memorial of 12 candles sat in a row alongside piles of flowers. Up the hill from the theater, about 20 pastors led a vigil for 350 people, some hugging and crying. A sign read, “7/20. Gone Not Forgotten.”

A federal law enforcement official said Holmes bought a ticket to the movie, went into the theater as part of the crowd and propped open an exit door as the movie was playing. The suspect then donned protective ballistic gear and opened fire, the official said, speaking on condition of anonymity because he was not authorized to discuss the investigation.

Authorities said Holmes shot scores of people, picking off victims who tried to flee. At least one person was struck in an adjacent theater by gunfire that went through the wall. Adding to the terror and chaos were two gas canisters thrown by the suspect that filled the theater with smoke.

Tanner Coon, a 17-year-old Aurora resident who was watching the film with two friends, said he first thought the gunshots were firecrackers. When he realized what was happening, he ducked between seats and waited for the shooter to bark demands.

When the firing ended, Coon said he started running up the row but slipped in blood and fell on a woman who was lying on the ground. He tried shaking her, he said, but she didn’t respond, so he left her behind and ran from the theater.

The shooting was the worst in the U.S. since the Nov. 5, 2009, attack at Fort Hood, Texas. An Army psychiatrist was charged with killing 13 soldiers and civilians and wounding more than two dozen others. It was the deadliest in Colorado since the 1999 attack at Columbine High School, where two students killed 12 classmates and a teacher and wounded 26 others before killing themselves.

Holmes had enrolled last year in a neuroscience Ph.D. program at the University of Colorado-Denver, though he left last month for unknown reasons. In academic achievement, “he was at the top of the top,” recalled Timothy P. White, chancellor at the University of California, Riverside, where Holmes earned his undergraduate degree before attending the Denver school.

Those who knew Holmes described him as a shy, intelligent person raised in California by parents who were active in their well-to-do suburban San Diego neighborhood. Holmes played soccer at Westview High School and ran cross-country before going to college.