As ‘Ferdie’ moves up, storm signal up only in 3 provinces | Inquirer News
Close
menu
search

As ‘Ferdie’ moves up, storm signal up only in 3 provinces 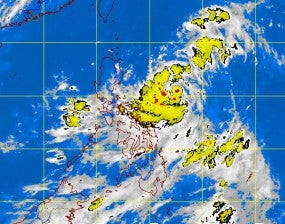 Balintang Channel is a waterway between Batanes province and Babuyan Islands in Northern Luzon.

Ferdie has crossed the Balintang channel and has merged with a low pressure area in the West Philippine Sea.

As of 10a.m., it was seen 130 kilometers northwest of Laoag City and has maximun sustained winds of 55 kilometers per hour near the center. It was moving west at 15 kph, Pagasa said.

Estimated rainfall is heavy to intense af 10-25mm per hour within 400kilometer diameter of the storm.

Residents living in low lying and mountainous areas were alerted against possible flash floods and landslides due to enhances southwest monsoon especially the western sections of Luzon and Visayas.

Fishing boats and other small seacraft were advised not to venture into the western seaboard of Luzon due to combined effects of “Ferdie” and the southwest monsoon.

Tropical depression “Ferdie” was forecast to be 300 kilometers west northwest of Laoag City outside the Philippine area of responsibility Saturday night, Pagasa said.