DENVER, Colorado—A masked gunman killed 12 people and wounded 40 others when he opened fire on moviegoers at a midnight showing of the new Batman movie “The Dark Knight Rises” in this city in the early hours of Friday, police said.

The violent and chaotic scene erupted about 12:30 a.m. local time (about 2:30 p.m. on Friday, Manila time) as a man in a gas mask stood at the front of one of the Century 16 theaters at the Aurora mall and set off a smoke or tear gas bomb before opening fire at moviegoers.

“You have the right person,” a San Diego woman who identified herself as Holmes’ mother told ABC News. She said she had awoken unaware of the shooting and had not yet been contacted by authorities. She immediately expressed concern that her son may have been involved in the shooting. 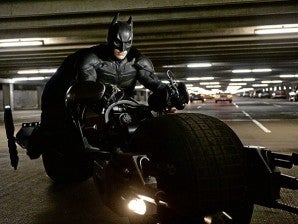 ‘DARK KNIGHT’ RISING SHOCKER. This undated film image released by Warner Bros. Pictures shows Christian Bale as Batman in a scene from the action thriller “The Dark Knight Rises.” The premiere showing of the movie in Aurora, Colorado, a suburb of Denver, was marred by the mysterious shooting of moviegoers by the gunman, James Holmes, 24, who is now in custody. The police believe there was no other shooter. AP

“I need to call the police,” she said, apparently speaking on gut instinct. “I need to fly out to Colorado.”

Local news reports showed aerial video of police cautiously searching Holmes’ apartment some five miles from Century 16 theater, as the gunman had earlier told police that he had explosives inside.

The incident was apparently the worst mass shooting in the US since the 2007 mass shooting on the Virginia Tech campus that killed 32 people and wounded 17 others.

Colorado itself has suffered mass killings in the past. In 1999, two students opened fire at Columbine High School in the suburb of Littleton, near Denver, killing 12 students and a teacher.

“This is a horrific event,” Aurora police chief Dan Oates told a news conference, adding that the suspect was in custody and that there was no evidence of a second gunman. There was no immediate word of any motive.

Police arrested the gunman in the parking lot behind the theater, police spokesperson Frank Fania said. “He did not resist, he did not put up a fight,” he said.

The gunman was wearing a bulletproof vest and a riot-type mask, Fania said. He was carrying a knife, a rifle and a handgun when arrested and one other gun was recovered from the theater, the police spokesperson said.

US President Barack Obama said he was “shocked and saddened” by the mass shooting.

“Michelle and I are shocked and saddened by the horrific and tragic shooting in Colorado,” Obama said in a statement, adding that federal and local law enforcement were still responding to the incident.

“My administration will do everything that we can to support the people of Aurora in this extraordinarily difficult time,” he said. “We are committed to bringing whoever was responsible to justice, ensuring the safety of our people, and caring for those who have been wounded.

Come together as family

“As we do when confronted by moments of darkness and challenge, we must now come together as one American family,” the US president said.

Obama was notified of the mass shooting at 5:26 a.m. (0926 GMT) by his homeland security adviser John Brennan, according to White House spokesperson Jay Carney. The president is currently in Palm Beach, Florida.

Dozens of police were at the scene, and authorities evacuated the area while they checked if there was an explosive device in the area.

CNN quoted one witness as saying he saw a “guy slowly making his way up the stairs and firing, picking random people.”

“We heard anywhere from 10 to 20 shots and little explosions going on. Shortly after that we heard people screaming. Then they came on the PA system and said everyone needed to get out. As soon as we got out, there were people running around and screaming.”

Wendy Post, who was waiting to be reunited with her daughter at a local high school following the shooting, said her daughter told her that the shooting erupted just minutes after the movie began.

“She said she saw the exit door open and something was thrown across the screen and then shooting started. It was chaos.”

Another witness said the gunman opened fire during a shoot-out scene in the movie, leading to confusion. The theater also filled with thick smoke, he said.

Benjamin Fernandez, 30, recounted that he heard a series of explosions and saw people running from the theater as the police shouted, “Get down!”

Salina Jordan said she saw police carrying and dragging away bodies. She said one girl was struck in the cheek and others struck in the stomach, including a girl who looked to be around 9 years old. She said the shots sounded like firecrackers until someone ran into the neighboring theater yelling, “They’re shooting out there!”

Oates quoted witnesses as saying that the gunman released some sort of canister. “They heard a hissing sound and some gas emerged and the gunman opened fire.”

One man said he was in the adjacent theater watching another screening of the Batman movie when he heard gunshots and the theater filled with thick, choking smoke.

He saw bullet holes in the wall and some people in his theater was wounded. “I heard moaning… they were in pain.”

A spokesperson for Denver’s Swedish Medical Center said three people had been admitted to that hospital with gunshot wounds and were in critical condition.

Some of the injured were children, with the youngest a 3-month-old baby. Victims were being treated for chemical exposure apparently related to canisters thrown by the gunman.

Aurora is home to a large defense department satellite intelligence operation at Buckley Air Force Base. With a report from Reuters