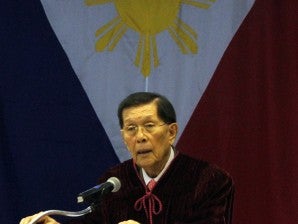 Senate President Juan Ponce Enrile is ready to engage President Benigno Aquino in a drinking spree if only to convince the Chief Executive that the time for Charter change has come.

Enrile is evasive about details of economic provisions needing improvement or clarification that he and Speaker Feliciano Belmonte Jr. want to discuss with the President.

“It’s up to me,” Enrile repeatedly told reporters asking about the provisions at the Kapihan sa Senado forum on Thursday.

However, the two leaders of Congress are apparently gearing for a bloody battle once Mr. Aquino is done with his State of the Nation Address on Monday.

“I do not pretend I can convince (him),” Enrile said about meeting the President to discuss Charter change and its urgency.

“I will have a smoke with him. If need be, I will also have a drink with him,” he added.

The President is known as a heavy smoker but does not drink, unlike his two predecessors, Gloria Macapagal-Arroyo and Joseph Estrada.

Enrile dismissed speculations that the President would be hesitant to give his nod to Charter change since it is one of the concrete legacies left by his mother, the late President Corazon Aquino.

“I don’t pretend to read the minds of anyone. I present my case, I argue my case and I will try to make the other side understand and accept my case,” said Enrile, who earned accolades for his role as presiding officer in the impeachment trial of ousted Chief Justice Renato Corona.

There is, however, one particular provision that Enrile has trained his guns on: The 60-40 ratio that limits foreign ownership of certain businesses like public utilities.

He said the plan was not to alter the ratio or control of assets in the Philippines.

“It is wrong to interpret that we will change the 60-40 (ratio). We are supporting the

60-40 rule but do not put it in the Constitution … Let it be delegated to Congress so it can have flexibility to maintain or relax (the ratio) if there is a need for it,” Enrile said.

Article XII of the Constitution provides that “Congress shall, upon recommendation of the economic and planning agency, when the national interest dictates, reserve to citizens of the Philippines or to corporations or associations at least sixty per centum of whose capital is owned by such citizens, or such higher percentage as Congress may prescribe, certain areas of investments.”

It says Congress “shall enact measures that will encourage the formation and operation of enterprises whose capital is wholly owned by Filipinos.”

“In the grant of rights, privileges and concessions covering the national economy and patrimony, the State shall give preference to qualified Filipinos,” it says.

The State, meanwhile, “shall regulate and exercise authority over foreign investments within its national jurisdiction and in accordance with its national goals and priorities,” the Constitution says.

Enrile said Congress would provide solutions to address issues where the 60-40 ratio is apparently an impediment.

“In certain areas of the economy, Congress would relax it. Congress in its wisdom may do so without abandoning the protection of Filipino interests. It’s up to Congress to address it. There’s no danger there,” he said.

The Senate President lamented that some sectors were opposing the idea of Charter change even before the issue was properly studied.

“(The Charter change we plan) will not take long. If we really face this issue and grab it by the horns, it does not require too much time and blah-blah-blah,” he told reporters.

Enrile explained that those opposing Charter change were still in the dark over how Congress leaders would do it.

He said the plan was to constitute Congress into a “modified  constituent assembly” where the two chambers would separately debate and vote on proposed amendments in the form of resolutions.

The Senate President said a constituent assembly involved less public funds because the current membership of the Senate and the House of Representatives would comprise it.

By contrast, a constitutional commission, similar to that formed in the 1970s, would require an election of delegates, Enrile said.

It was Senator Franklin Drilon who raised the possibility of convening Congress into a “bicameral constituent assembly” to effect Charter changes.

Senator Miriam Defensor-Santiago, chairperson of the committee on constitutional amendments, was among the first to raise a howl over the proposal.

Santiago was at it again on Thursday, warning that transforming Congress into a constituent assembly “would raise suspicion among the people that legislators might be serving certain agenda under pressure from vested interests and other lobby groups.”

“Certain politicians boast that even if the nation calls for a constitutional convention with elected delegates, the local politicians would be able to control who the delegates will be. That is hubris, unjustifiable pride of authority,” Santiago said in a speech delivered at an event of the Girl Scouts of the Philippines Thursday morning.

Enrile was quick to assuage Santiago’s fears, saying he and Belmonte had agreed that they would not accommodate resolutions that have nothing to do with the economy.

“(Charter change) resolutions that will be filed in the House are supposed to be limited to (economic provisions). If someone attempts to sneak in something else, that resolution will not be passed. The same principle applies in the Senate,” he said.

Charter change critics are worried specifically about attempts to do away with the political provision that imposes term limits on all elected officials.

“The political (aspect of the Constitution) is OK, although I would agree with suggestions of a federalized government. Just so we can see which parts of the Philippines would develop first,” Enrile said.

Enrile said Belmonte even brought along House Majority Leader Neptali Gonzales II to his residence last week when they talked about approaching the President about Charter change.

The Senate leader said the Speaker “promised he would reach out to the President and find out if (Mr. Aquino) would be receptive and available for discussion of our proposal to reexamine the economic provisions of the Constitution.”

Enrile said he and Belmonte had not set a specific time frame for the plan to discuss Charter change in Malacañang.

“But the Speaker said he would advise me when the President has already set up a schedule to talk to us,” he added.

Enrile expressed confidence that fellow senators “who are equally patriotic as anyone else want our countrymen to have a better life, for the country to progress and to provide jobs for jobless people.”