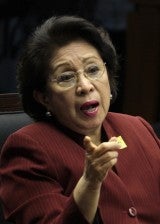 Ombudsman Conchita Carpio-Morales on Wednesday ordered Zamboanga del Sur Representative Aurora Cerilles charged with graft before the Sandiganbayan for the allegedly irregular purchase of medical supplies in 2001, when she was the province’s governor.

Included as well were Rey Morgada and Neil Cruz, representatives of U-Net Distributors Corp. (U-Net) which won the contract to supply the merchandise.

The Office of the Ombudsman said in a statement that the alleged irregularities were discovered by the Commission on Audit (COA), which found that the provincial government had bought fairly common items from an exclusive distributor, in violation of the rules.

It said this violated a COA circular that allows public officials to purchase items from exclusive agents or distributors only if the distributor has no sub-dealers selling items at lower prices, and if there are no suitable substitutes of the same quality available at lower prices.

The Ombudsman said the items bought from U-net were quite common and did not require that they be branded names. There was no need to purchase them from an exclusive agent, it said.

Had there been a public bidding, the province could have saved P1.2 million because several suppliers would have competed and tried to offer lower prices, it said.

“There is reason to believe that [they] had unlawfully allowed the direct purchase of medicine supplies from U-Net Distributors Corp. despite knowing that the situation does not call for such kind of purchase and notwithstanding that the documents supporting the identity of the said distributor as an exclusive distributor are questionable,” it said.

Cerilles is on her first term as Zamboanga del Sur representative. She chairs the House committee on the welfare of children, and is vice chair of the committee on higher and technical education.