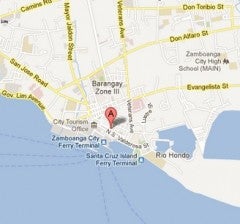 ZAMBOANGA CITY, Philippines—Police have filed murder charges against a Chinese-Filipino in connection with the killing of two children whose chopped-up and charred bodies were found a day after they went missing while scavenging for scraps of metal to earn pocket money for school.

Police said they were also investigating Alfred Tan Miranda for what they said were suspicious mounds of earth, including one that appeared to be a fresh grave, found by the authorities during an inspection of the yard of his home following his arrest on Sunday.

Chief Inspector Elmer Acuña, chief of the Tetuan Police Station, said two counts of murder were filed against Miranda on Tuesday in connection with the deaths of Jessiedel Manalo, 11, and her cousin John Larry Mendoza, 8.

The mutilated and charred remains of the victims, who went missing while scavenging for metal scraps on Saturday, were recovered in a garbage pile at the back of Miranda’s house on Isabela Salazar Drive in Talon-talon.

Miranda, 40, was arrested Sunday and remains locked up at a police jail here.

Acuña said the Miranda was given 10 days from Tuesday to answer the charges.

Rosanna Mendoza, John Larry’s mother, said the filing of the cases was only the initial step in their quest for justice.

In his investigation report, Police Officer 3 Butch Canones said another relative of the two children heard them talking as he passed by Miranda’s house Saturday night on his way to the Talon-talon barangay (village) hall to report the disappearance of the two.

The Manalos and the Mendozas said help came too late for the two children.

Talon-talon Councilor Vicente Iturralde said Miranda was reported to be suffering from Down syndrome, a genetic disorder. Down syndrome sufferers  have 47 chromosomes instead of the usual 46 and suffer from various degrees of physical and mental disabilities.

Acuña said the house that Miranda lives in was “full of scraps.”

“In every corner, you see empty bottles, plastics, metals, iron bars, sheets. You will immediately conclude that Miranda engages in either collecting or buying scraps,” he said.

But Iturralde said they never saw him picking up anything from the streets.

“The scraps may have come from other people but we can never tell at this moment,” he said.

Acuña said the police were evaluating past cases of missing children, “because if you happen to be inside the property, you see small earth mounds around, and in a corner, there is some kind of fresh grave with flowers on top.”

He said when investigators asked Miranda what was under the small mounds, he said he was into gardening.