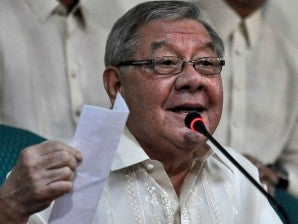 The House of Representatives will ask the Supreme Court to reconsider its reported decision to reduce the voting power of Congress from two to only one vote in the selection of nominees for Chief Justice in the Judicial and Bar Council (JBC).

In an interview, Speaker Feliciano Belmonte Jr. said the House would file a motion for reconsideration, saying Congress has always had two votes because the Senate and the House of Representatives voted separately on the matter.

“I don’t like to use the word undermining or anything. What I am saying is that they (Supreme Court justices) are reducing the votes (of Congressional representatives)  to one-half vote,” he said, adding that the legislative branch would exhaust all legal means to challenge the decision.

The high court decided this week on a petition filed by former Solicitor General Frank Chavez questioning the composition and voting rights of the JBC’s  two congressional members—Iloilo Representative Niel Tupas Jr., chairman of the House committee on justice, and Sen. Francis Escudero, chairman of the Senate committee on justice. Chavez pointed out that the Constitution calls for only one vote from Congress.

According to reports, the Court agreed that the Constitution called for only seven members of the JBC.

The JBC currently makes room for eight votes because of the two votes given to Congress.

Lawyer Ma. Victoria Gleorestu Guerra,  acting  Public Information Office chief,  said she was not yet authorized to officially disclose the results of the voting on this issue during the regular full court session yesterday. The ruling is set to be promulgated on Thursday.

“The information given to me is that the decision will be released this Thursday but a vote has already been reached…It’s just a matter of preparing the dissenting opinion and the decision.”

Guerra also told reporters the vote is not final until it is officially promulgated.

Belmonte disagreed with the reported decision to give Congress only one vote, arguing that the Constitution speaks of  two chambers of Congress.

“We will exhaust all our remedies to see to it that this current situation [of having two votes] which has been in use for many years continues,” the Speaker said.

Eastern Samar Representative Ben Evardone said he hoped the decision to clip the representation of Congress in the JBC was not a reaction to the Corona impeachment trial. With Karen Boncocan, INQUIRER.net